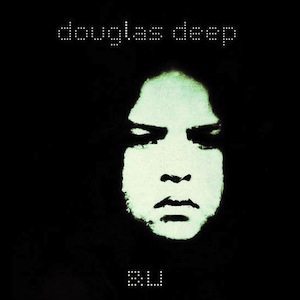 There's a musician, who goes by the name of SK123, whose music I have been an admirer of for some years. Take a smattering of virtually every electronic music genre since the early 90s you can think of, add a pinch of eclecticism, throw in some dark atmospheres and eery soundtrack motifs and then layer with club-friendly and varied beats - that pretty much sums it up. I gave up on ‘dance music’ quite some time ago; but SK123′s music is “dance music+”. So often the term IDM is bandied around, but basically it means nothing. In SK123′s case, ‘intelligent’ is exactly what it is. Coupled with a sense of melody, drama and incredibly deep production that create the subtlest of soundscapes at times; or the hardest audio assault at others.

Anyway. What the hell am I talking about SK123 for when the title of this post says Douglas Deep? Well, SK123 is actually dead. In fact he’s been reincarnated as two distinct, yet unified persona in Macerator and Douglas Deep.

First off, let me just say that I’m not the most knowledgeable person when it comes to contemporary techno/IDM/club-orientated music. For me techno started and ended in Detroit in the late 80s/early 90s along with proper acid house; that’s what I know, that’s what I like.

However, what I do know is that Douglas Deep, with his album &U, has conjured aural images of this era of electronic music; a kind of futurism which occasionally harks back to Juan Atkins, Mr Fingers, Frankie Knuckles and A Guy Called Gerald, but is basically of the here-and-now. He doesn’t imitate, plagiarize or create pastiche; what he does is use ultra-modern production and sound to give you the same emotional rush of the kind I first felt listening to the aforementioned pioneers. 'You (Ewe/U)' contains the kind of droning bass and kick combo that became synonymous with Chicago and Detroit 20-odd years ago, but there’s a more relentless feel to it. Darker, perhaps. The beats are crisp and full, but they never overshadow the other sonic components. Played loud, it’s devastating.

Also, throughout the album, there are subtle sonic incidentals: besides occasional vocal phrases and gasps, there are bits of found-sound, synth bleepery, background noise and other elements which are normally associated with ambient genres, but are mixed into this context with subtle flair.

The track I’m currently listening to, the epic 'Nothing', consists of a minimal structure but with constantly changing timbres. The word ‘repetitive’ is often used as a criticism levelled at dance music, but here it is utterly essential to allow the sound itself to evolve and implant itself in your brain. The simple lead synth line features a repeating set of notes, which similarly to Phillip Glass’ music, gradually evolves in timing, nuance and tone. It starts all monolithic but develops into psychedelia. Visually, I think of Harvey Keitel in ‘Mean Streets’ weaving nauseously around the bar, trying to stay upright… only in slow motion. That’s as close as it gets.

Anyway, suffice to say, I really like this, the first and hopefully not the last Douglas Deep album. Recommended.