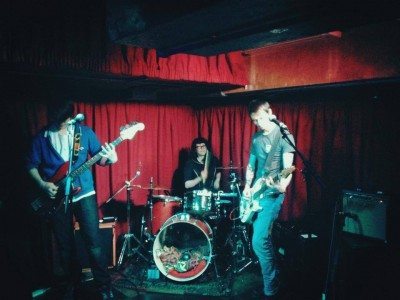 By Aidan Hehir of
That Massive Bereavement

On planning my journey to the gig I discover that the Northern Line is closed; the nearest Tube Station is not accessible. Maybe I should leave it? Its gonna cost £22.50 to get in from Rochester, now involves transport complications and Houdini have pulled out, replaced by a band (Yokozuna) I've not heard before. I've seen Frau Pouch and Bear Vs Manero many times and both are playing gigs near to where I live (Rochester) in the next month...But I go; in the train on the way back I feel like I've been electrocuted, enlivened and inspired. It was more than worth it.

The venue is an "intimate" cellar which is thankfully full and we encircle the bands on their modestly elevated stage. Frau Pouch kick things off unleashing their unique brand of post-punk. Their instantly catchy songs - short, tight and fast - are delivered with a deference and wit that obscures the ludicrously depraved lyrical content. Those unfamiliar with the songs will have bounced to tunes about orgies with mythical beasts, a man cursed with a foetus for a penis, and Godzilla's sexual encounter with a building (while occupied). Various allusions to cult films, comedians and alien creatures pepper their repertoire giving their staccato tunes real depth. New songs like 'Space Chicken', 'Aqueducts' and 'Podling Party' are insanely appealing and soon to be released on their forthcoming EP 'All Hail Space Chicken'.

Bear Vs Manero somehow manage to maintain the standard laid down and bestride the tiny stage with an intoxicating mixture of menace and parody. They contort, howl and flail while delivering chugging, bass-heavy riffs that support Toms' sharp tongued lyrical tirade. They become more physically discordant as the set progresses and Toms and Bevan (bassist) push into the mesmerised crowd. They end their set with a medley of 'Discodia' and the new 'Fluoride Frustration Face' which transfixes with a shearing mixture of raw power and listless abandon. Bevan falls to his knees on the beer-soaked floor amidst the audience, Toms howls as he hangs from the ceiling, Luke slashes at his guitar and Daz smashes his drums; I feel I'm about to commune with the other as the sensory orgasm builds and finally, as the contours of "the truth" are revealed, its ends. The bass guitar is flung contemptuously backwards and bodies collapse like loosed minarets.

Outside talking to BvM its difficult to convey to them how good they sounded; I saw Mudhoney play in London a week earlier and good as they were, the intensity levels were poles apart. It's difficult to imagine that Yokozuna can follow this without looking distinctly average; I wonder whether I should go now and leave on a high. Thankfully, due in large part to Joe from Frau Pouch's recommendation, I stay.

Yokozuna are brilliant; they play effortlessly to a searingly high intensity. The underlying distorted bass carries Chris's layered subtle melodies while the drums strafe unflinchingly. This is certainly loud and heavy but cut with a melodic seam that brings to mind the best of Dinosaur Jnr. They espouse a generally languid air which makes the occasional lapse into white noise and the just manic - as when Phil scatters the crowd with a deranged high-land fling - all the more affecting. 'Spaceship' is particularly brilliant and delivered with a genuine passion; at the end I pick up a (free) copy of their 2010 EP Les Fous Sont Maitres de L'asile. Yokozuna are soul food and yet another reason to be cheerful.

The Northern Line is still closed on the way back, the "fast train" from St Pancras is delayed and the streets of London, and later Rochester, are festooned with people in various states of drunken melodrama. But it's been a great night.