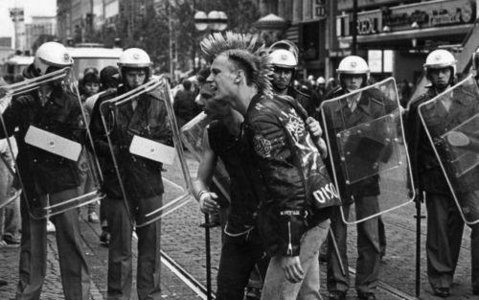 Punk was great, wasn’t it? Young people scaring the shit out of old people, listening to loud music, dressing all funny like and caring about society. Isn’t it terrifying when young people start to question the status quo? Maybe the monarchy *is* a bad thing. Maybe our system of government *is* flawed? Prior to that we had rock n’ roll, before that there were black slaves singing the blues, highlighting their woes, and so on, and so on.

Music has, in many ways, always been a form of protest. Maybe not politically, but as an expression of the writer’s soul. It’s been a way of telling the world how you feel, but with the advent of pop came the ability to shout your message to the world in plain English. There’s no room for ambiguity when you’re yelling at the world “Fuck you, I won’t do what you tell me”.

Problem is, it seems there’s no protest left. Where is this generation’s punk?

Turn on the radio and all the songs are about love, thinly veiled misogyny, or shouting “WAY-O” at the DJ. There’s nothing about smashing the state, fighting the law or the Queen being dead. But that’s fine. Protest music never really had a voice on the airwaves, did it?

We live in a society where the poor are being demonised by the government, our NHS is being quietly dismantled while the press looks the other way. There’s talk of selling the Royal Mail to the highest bidder so they can offer the shittest possible service they can get away with. And yet it seems no one’s outraged.

There’s plenty of grumbling on Twitter, and people are filling in online petitions like nobody’s business, but what does that achieve? Why don’t we have bands playing loud protest songs outside parliament, like Pussy Riot standing up for their convictions in Moscow?

Bands are more concerned by gaining Twitter followers and how much Spotify will pay them than what they’re saying. Now everyone can record music on their laptop, everyone thinks they can make it in the business; who the hell would jeopardise their future PR by getting themselves banged up for protesting?

Well fuck that. I want a punk movement. I couldn’t give a shit if it’s snotty brats hammering out three chords or up and coming hip hop telling the man to go fuck himself: it’s not the sound, but the message.

And that message needs to be “Fuck you.”