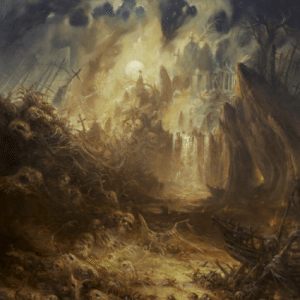 Out on July 9th through

If sorrow had a soundtrack, Tempest, the newest release from Lycus (Oakland, CA) would be it. ‘Coma Burn’, the first track on the album opens with a languid melody that hypnotizes as it simultaneously causes the muscles in the body to relax. Acting as both the filling and deflating of air in the chest, the overcast tempo breathes inwardly as a gloomy ambiance is exhaled outward and back into the universe. The song surprises towards the late middle, picking up the pace briefly while maintaining the opaque substance of the sound.

‘Engravings’, the second track on the album begins with a weary presence. The drums carry the song through its beginning as the haunting vocal style weaves inside of the song. Dark and unfathomable imagery enters the brain as the malevolent rhythm of ‘Engravings’ unfolds. Reminiscent of a Molotov cocktail mixture of Asunder, Mournful Congregation, and Laudanum, this song in itself (as well as the album in its entirety) is bereaved and laced with woe.

The album closes with ‘Tempest’, a 20-minute composition that starts as enervated as it ends. The very core of the song just drips with melancholy. The opening notes are eerie; they take you to a place of weary hopelessness. Just as you feel yourself falling into an almost dreamlike state, the track picks up and hits with a torrent of forceful vocals and quick pace that resets the system back into a lucid state. 13 minutes in and ‘Tempest’ has already taken the listener to so many highs and lows. An anesthetizing feeling takes over as the vocals cease and beautiful fateful sounds fill their place, numbing the mind. The remaining minutes of the track feel like this, and leave you sitting in stillness.

The most impressive quality Lycus embodies is an inborn way of holding true to the classically heavy, funeral doom style while also infusing messages of wavelike tranquility throughout the record. Almost like gold thread being weaved through black cloth, the moments of light on Tempest are just as impressive as the solemn, dour tempos that compose its body.