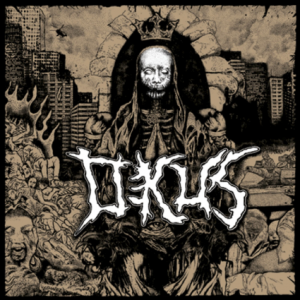 Okus, from Drogheda’s self-titled release strikes the system like war. It leaves an aftertaste of terror and destruction, reminiscent of tales only read about that detail the Mongol invasions of the 13th century. With songs that punish with the same violence, terror, and destruction brought during a time of overrule and panic, Okus have produced an album that is unforgettable and crushing. Playing crusty doom filled death metal that weaves into an eerie dark tunnel tinged with high speeds of d-beat hardcore, punk, and grind, this is a band new on the map but one destined for takeover.

The first track on the album ‘Blood and Oil’ opens with drums that are almost tribal in nature. The vocals punish with filthiness, you feel the track hit you right in the sternum as it sets the stones in cement one by one. The track continues to bleed at a slow drip until it detonates half way through, exploding into a fusion of hardcore and grind that’ll make you want to reach into your head and rip into your own flesh. You feel the anger as lyrics are spewed out and onto the ground, like spit from an angry tyrant.

‘Light Obscene’ is one of the heaviest hitting tracks on the album. A song that is so pissed off and ugly that it’s beautiful, it’ll chastise with a crushing blow. Full of politically motivated undertones, the droll and doom-ridden beginning will almost begin to fool you right before an explosion of fury (that is oh so catchy) attacks your system, broad siding you with borderline primordial sounding reverberations.

The track ‘Jackyl’ (another memorable track) has a sound that conjures up scenes of being trapped in a run down mental ward. Like being a spectator to a run down 19th century English institution. As the song plays on you can almost see people experiencing active psychosis, rocking back and forth, tearing out their hair, and losing their minds. Reminiscent of Victims, this song will corner you, take you as a prisoner in your own mind, and leave you for dead.

‘Burn It To The Ground’ draws the album to its end, a good choice for a closer. The tracks fast paced ferocity makes no apologies and leaves the listener bloody and exhausted.  The best part about the whole album is that although it consumes with its ugliness and waste, it doesn’t leave you sorry for the residual throbbing pain you experienced; a consolation prize that’ll leave a mark. Buy this record. Let it throw you into battle with yourself.

The Okus S/T was released on Underground Movement on June 22nd.