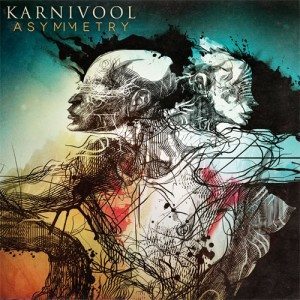 Out now through Cymatic Records and Density Records

While there is no doubt that experimentation and growth are positive traits, the most consistent artists are those who find their niche and expand their sound within the boundaries they set for themselves. Take one of Karnivool’s biggest influences, Tool, as an example: all four of their studio albums operate around the same core sound and aesthetic, with minor changes and experiments that differentiate them from each other. They’re not trying to change the face of music; they’re striving to perfect the sound they’re best at.

Asymmetry is the sound of Karnivool being somewhat uncomfortable in their own skin. There is more variation and they clearly want to bring the progressive elements to the fore, but there is something extremely jarring about the way the album has been constructed. Take a track like 'The Refusal' as an example: it just sounds so... unnatural. Karnivool has always been at their best when doing progressive, metal-tinged alt-rock and while it’s good to see them wanting to twist the formula a bit, 'The Refusal' is one experiment that just doesn’t really work.

On the other hand, the beautiful, delicate 'Float' is a brief excursion into ambient post-rock that is perfectly executed. It is a standout towards the end of what feels like a very long album and it does a great deal for justifying some of the less impressive experiments. Its placement just before 'Alpha Omega' and dreamlike closer 'Om' is ideal, finishing the album on a positive note.

For the most part, Asymmetry is an enjoyable record with songs like 'Nachash' and lead single 'We Are' paving the way for the longer, more progressive pieces. These are generally strong compositions, appearing at regular intervals and bringing some sort of structure to proceedings. With that said, a clearer direction and trimming of some of the fat on here could have resulted in Karnivool’s most impressive work yet; here’s to hoping that Asymmetry is merely the overweight template for a much leaner album number four.