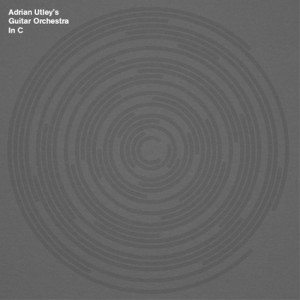 Adrian Utley has long been recognised as a staple guitarist thanks to his longstanding and impressive (yet still rather slim) catalogue of work with Bristol's best band ever Portishead. Often embracing the sexier side of the three-piece (sorry, Beth) with his dirty guitar licks and wah-waaah wah-wah-wah-wah waaah guitar solos, it's a dead cert that their music would not be quite so bold without the Tarantino guitar tinge and gnarly tremolo strums. "But why are you phoneticising like a baby?" you might be thinking… well, the point is that Utley's virtuosity is not in his blinding Hendrix-skills but rather in his total understanding of the sonic architecture of his chosen instrument, and that's what Andrian Utley's Guitar Orchestra In C is all about.

Composed in 1968 by Terry Riley, In C is a minimalist exercise of sorts, with its roots spreading into aleatoric music due to the large element of chance and interpretation in its score. The arrangement itself is particularly non-traditional, made up of 53 individual short phrases instead of your standard score of music that runs straight from beginning to end. Focussed on the ideas of crescendo/diminuendo, polyphony and polyrhythm, Riley's score honours interpretation and encourages performers to actually stop playing sometimes and listen carefully to the piece's progress:

"Patterns are to be played consecutively with each performer having the freedom to determine how many times he or she will repeat each pattern before moving on to the next. There is no fixed rule as to the number of repetitions a pattern may have, however, since performances normally average between 45 minutes and an hour and a half, it can be assumed that one would repeat each pattern from somewhere between 45 seconds and a minute and a half or longer." [From Riley's In C Performing Directions]

Utley's arrangement for his orchestra is made up of 19 guitarists (including John Parish, Invada-band Thought Forms and Portishead live-member Jim Barr), 4 organs and a bass clarinet to round it all off. The organs are a particular treat in the performance and amidst the flurry of arpeggios give the whole thing a Philip Glass feel to it (though it is hard to think minimalism without Glass popping up anyway).

As the piece moves through the many rise and fall movements, with clarinet honking in place of pizzicato cello, there's often a familiar scent of Steve Reich in the air and the various tones and textures of guitar rise above the typical sound one would expect from the instrument into something very, well, orchestral. The movements are beautiful, engaging, and driving, but it also feels as though much more could be done to expand on the discourse of the guitar and the many, many playing styles the instrument offers, in more contemporary music for example; a post-rocky tremolo or the very orchestral drone of an eBow perhaps. This minor complaint aside, the performance is a deep, rewarding exploration for those more familiar with the classical form but with an appreciation for popular instrumentation and stylings, such as fans of MONO, Tarentel or Explosions in The Sky.

The sheer length (just over an hour) and amount of repetition may actually become an exercise in patience for some people, but it is important to be aware of what you're immersing yourself in before you begin. The intention of the piece is progressive, unspoken communication between a large ensemble of musicians who must freely and independently move from the first phrase to the 53rd whilst remaining part of a whole, and this observation and performance acts as a double-edged sword, of course.

The interpretation of In C by Andrian Utley's Guitar Orchestra is a carefully performed, intricate recording displaying just one performance of many interpretations not only by the torrent of ensembles to have tried it, but for this particular orchestra; The Guitar Orchestra will be touring throughout the end of the year and no doubt into 2014 where they'll likely reinterpret Terry Riley's work over and over again.

For those who attend a recital in person, they can look forward to a guaranteed one-off unique experience, with members from your city (which should likely mix it up somewhat), but for those who don't: you have here a documented, beautifully recorded, excellently performed imprint of a piece of music that will never be performed again in the same way… and that's pretty neat.