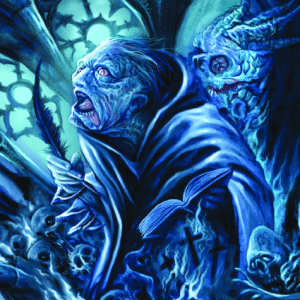 The Ruins Of Beverast

Out on September 6th through

The church bells ring for the late night service. Several people who have been sleeping outside, waiting for their last sign of hope, begin to stir and make their way into the building. They have to carry each other, some almost unable to stand due to weakness and exhaustion. They kneel before the cross, and close their eyes. Knowing that God has long since abandoned them, their chanting becomes unified weeping – weeping filled with hatred and anger – that begins to take on a life of its own. A black mist seeps in through the door, through the cracks in the windows, and a dark figure is formed before the survivors. They are delirious, hallucinations (or are they?) oppressing them from all angles. And the figure speaks... in a low, demonic growl that sends shockwaves reverberating through the building. For a second, all is still, and it seems as though the daemon’s blasphemous speech has come to an end... before the people begin to rise, captivated by the psychedelic theatrics before them, and chant once more in unison, but with purpose now. They submit to the chaos surrounding them, puppets to the unholy choir of dark figures dictating their movements. The daemon lets out an earth-shuddering cry before a hurricane of profane noise sends the church collapsing into a bottomless pit of hellfire.

If that imagery sounds in any way appealing to you, you will surely find something to enjoy in The Ruins Of Beverast’s latest offering, entitled Blood Vaults – The Blazing Gospel of Heinrich Kramer (Cryptae Sanguinum – Evangelium Flagrans Henrici Institoris) (try asking for that one at your local record store!).

From the outset it’s apparent that this is going to be one of those love-it-or-hate-it albums, which is largely dependent on your ability to submit to its overwhelming atmosphere. A great deal of effort has gone into making your experience with this album surreal and disorientating, the compliance with which will go a long way to determining your enjoyment of the album as a whole.

Fans of The Ruins of Beverast’s past works may be surprised to hear that there is very little in the way of black metal on this release, with the slow and crushing sound of funeral doom dominating the nine tracks. This is used in conjunction with repetitive and hypnotic psychedelic elements to create an enveloping atmosphere, one that has been used very successfully by bands such as Esoteric and diSEMBOWELMENT in the past.

Unfortunately, it doesn’t always work as well on Blood Vaults. Along with the great atmosphere, the plodding tendencies of the genre are also present throughout the near 80 minutes of music, making it a tiring and sometimes quite uninteresting listen. Also, the novelty of the ‘spiritual’ ambience (thanks to the persistent use of chanted vocals and an organ) wears thin after a while and you may find yourself frustrated at the fact that the album isn’t even halfway done yet. You would even be forgiven for finding the whole thing a little bit silly and over-the-top, with the growled spoken-word vocals and Latin / Shakespearean lyrics being the key offenders.

With that said, it is also the source of much of the album’s charm. It can afford to be corny because it is generally well-executed (much unlike the descriptive story I tried to use to illustrate this point). This is surely one of 2013’s most unique metal releases and regardless of your opinion on it, there can be no denying the talent on display here.