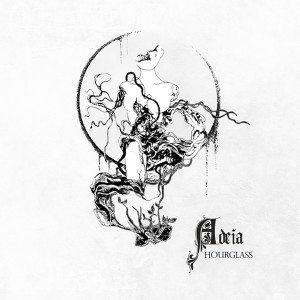 Adeia is a 7-piece outfit from Rotterdam, The Netherlands which last year self-released its debut album Hourglass as an mp3- download only. Luckily this progressive metal band with an avant-garde touch now sees this album re-released as a physical product. The dutch label Layered Reality Productions (a “do-it-yourself-production-collective” in which bands/artists work together to help themselves (and each other) forward in today’s musical landscape) has made this fine piece of music available now on CD as well.

Hourglass draws in various musical styles ranging from progressive metal to classical music and even a bit of death metal as well. The classical touch is formed mainly by the violin by Laura ten Voorde and the cello by Ruben van Kruistum. This already indicates that we have to deal here with some highly skilled musicians. In fact the start of this band was rooted at the academy of music where some members were studying classical music. The love for heavy music though drove them to blend both styles and I must admit they’ve done it with flair.

The 5 tracks, clocking about 44 minutes, on Hourglass linger in the more melancholic, sad and slightly depressed side of the mood-spectrum. Slow atmospheric pieces with violin, cello and piano are combined with fast, technical bits showing their high level of musicianship.As  if the acoustic Kronos Quartet is joined on stage by a raw and amplified Opeth. The lead-vocals by guitarist Franc Timmermans change from clean to short, but brutal, death metal growls and I am very fond of his voice. Sadly the backing-vocals by Laura are a bit lame to me. Could be a flaw in the final mix? Maybe this is something for the band to pay attention to in the future. Nice to hear that these youngsters even have incorporated a little nod to the grand old Pink Floyd, just listen to the final part of the title track Hourglass and you know what I mean.

Pièce-de-resistance is without doubt the closing track ‘Inheritence’, a 14 minute lamenting epic in which Adeia tries to cover all the emotions a man can endure. A long sad and melancholic intro with the classical instruments leads to a very positive middle piece with the sound of joyfull children and birds (maybe it was just a dream?). But soon it’s back to some darker moods with brutal riffing evolving into a cacophony of sound that depicts someone going insane in his head (or was it just me ?)

Bottomline, Adeia has managed to create a quite distinctive sound which is remarkable for such a young troupe. With their diversity in music, technical skills and thought provoking lyrics they show that they are definitely a band to keep an eye on.