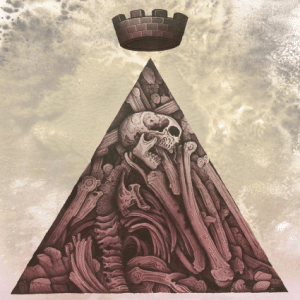 Let me preface this review with a small confession: I love Converge. When I first heard Jane Doe my favourite bands were Bring Me the Horizon, Asking Alexandria and Underoath; hearing 'Concubine' for the first time was like upgrading from the metalcore trial version to the full version. In short, no band has managed to challenge my ideas of extreme music in quite the same way as the legendary hardcore outfit have.

Of course, Converge only have so many albums, so you can imagine my happiness earlier this year when I discovered a whole host of side projects to check out. Like the others, Doomriders is an excellent variation on the standard metallic hardcore formula, with a much stronger focus on the sludge, doom and stoner metal aspects. Grand Blood is the third album from the Nate Newton-fronted project and it reveals a far more focused and serious effort from the tongue-in-cheek days of their debut.

After a brief intro track, Grand Blood launches into 'New Pyramids', a signature slab of the band’s crushing formula. All the aforementioned genres are present, with a melodic edge that sets Doomriders apart from their contemporaries. The song sets the tone for the rest of the album – a heavy-as-hell variation on good old-fashioned rock ‘n roll. 'Mankind' exemplifies this attitude even more so, with a 70’s hard rock riff giving way to bone-breaking heaviness before an anthemic hardcore chorus.

On the downside, that’s pretty much where the album’s innovation ends. Deathwish has released some truly genre-defying albums this year (Deafheaven, Touché Amoré) but Grand Blood sometimes feels like just another cog in a well-oiled machine. That’s not to deny its appeal – this is a fun record that pays homage to all kinds of rocking out – but it just feels so safe at times. It’s all by-the-numbers and that’s great for fans like me, who will consume anything and everything Deathwish puts out, but this is not going to be an album that will be remembered for years to come.

However, it’s unfair to criticise a band like Doomriders for just wanting to have fun. It doesn’t feel like they went into the album wanting to change the face of music and Nate Newton is one of the most down-to-earth musicians out there, so as long as you’re well aware of the fact that this is not a game-changer you’ll be pleased with the outcome.

Grand Blood is yet another successful addition to the Deathwish catalogue but one that provides instant gratification rather than repeated listening.