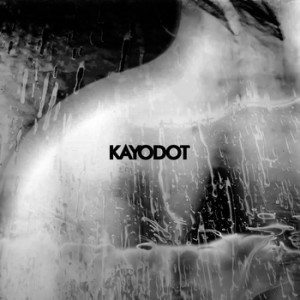 Here’s another one in the category uncompromising and difficult music, but I thank God on my knees that there are groups like Kayo Dot around!

After reviewing some ‘weird’ ones in my first year writing for Ech(((o)))es And Dust (I recall Fireweheelbombfire, Killsong, The Gabriel Construct and Omb) I thought that I had it all done this year with these experimental releases. Well not quite it seems. I must admit that I was not familiar with Kayo Dot, I came across them wandering through Bandcamp. Hubardo seems already to be their 6th full release so I have a lot of material to catch up because I’m quite hooked on their latest offering.

Formed out of the ashes of the progressive metal outfit Maudlin of the Well back in 2003 Kayo Dot is an ever shifting collective with Toby Driver as the main, consistent force. Experimental post-metal might be the best way to describe the music but that covers only just a small piece of the total spectrum this band tries to reach. In fact they mainly explore the edges (and beyond): from dark ambient to death metal and from progressive rock to avant-garde jazz. Hubardo is in fact a 100 (!) minutes ordeal about the events of a meteor crashing into Earth and it needs for sure repeated spins before the initial chaos becomes (at least a bit) structured. From the contemplating modern classical influenced piece ‘The Second Operation (Lunar Water)’ to the death metal infused grunts and wild, frantic outburst of avant-garde jazz of ‘Floodgate’ is only one skip on your player but light years apart in terms of styles. Kayo Dot somehow though manages to fuse it all together in a natural flow so it never sounds forced albeit I have my doubts whether the lyrical concept of the album stands out well enough as the attention is fully drawn into the layers and layers of music.

Toby’s incredible vocal range is memorable. With ease he changes from furious grunts & growls to haunting & chilling clean vocals. But what to say about the skills of drummer Keith Abrams? At times this man breaks all the speed records intensifying the aural experience. With the addition of violins, all kinds of brass and woodwind instruments and even choral vocals this experimental beast is as abstract as emotional, yes it is even spiritual at times. Hubardo really is a showcase for outstanding musicianship and creative, innovative composing. The production is sharp giving the music the grandeur it deserves.

It is hard to describe the tracks individually but the somewhat ‘slower’ tracks are still my favorites. I already mentioned the doomy ‘The Second Operation (Lunar Water)’ with it’s Anathema-like intro, but also ‘And He Built Me a Boat’ (post-rock guitars and Dead Can Dance influenced vocals) and the 70’s prog infested freakout ‘The Wait of The World’ with numerous instrumental solo’s are stellar pieces of music.  If you have the mention a track that has the full Kayo Dot range (apart from the grunts) I would certainly point at ‘Passing The River’. You’ll even find some melody in the vocal parts! With it’s down-tuned, distorted guitars in the middle the band drives you into a muddy stoner rock pool where no escape seems to be possible.

So people, if you are looking for something experimental performed with intensity and soaked in passion, Hubardo is definitely an album to listen to. But don’t give up too soon!