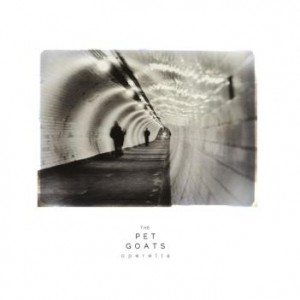 The Pet Goats, from Vienna, Austria, liken themselves to The Velvet Underground, Sonic Youth and "the great NYC Noiserock Heritage". I don't see that myself; there's a Lou Reed swagger to the vocals alright and while there's echoes of the languid dissonance of the Velvet Underground, there is little of the discordant abandon characteristic of Sonic Youth, with the exception of the intro to ‘Military Mind Control’. The sound is too controlled throughout and (perilously) close to indie at times. The accomplished playing and near-slick production may put off lovers of all things raw - like myself - and I suspect they sound better/more caustic live.

Lyrically, The Pet Goats articulate a heavily political message raging in particular against US military and the nefarious influence of the neo-conservatives. There's a palpable underlying anger in the lyrics that could have been unleashed more often in the vocals and the music.

Opening track ‘Operetta’ combines a kind of menacing David Byrne vocal delivery with layered, subtle distortion. The production is clean and the hooks are devilishly catchy. ‘Zombie Lover’, comprises rhyming couplets, with a Bowie-esque observational style and again it's difficult not to nod along.

For me ‘Teleprompter Tears’ is the best song on the album; a shuddering bass line underpins a warped techno sound. Is it possible to review a Germanic band without mentioning Krautrock? Not after hearing this song, but the keyboard is not excessive. The song conjures images of post-modern ennui, transposed against Viennese Imperial grandeur. Its fabulously addictive, dripping with attitude; two parts disdain one part revolution.

The insouciant cynicism infusing ‘Cartoons’ is immediately reminiscent of The Fall and The Fatima Mansions; castigating lines such as "It's what you find in the newspapers and TV" are charged with bitter irony and delivered with an engaging pop sensibility.

After these opening four songs the rest of the album is bit of a disappointment; ‘So Interested’ is particularly forgettable. Too often the lyrics are orientated towards perfect rhymes which gets a little forced as on ‘Military Mind Control’ and especially ‘Come On Get Ready’; the line "we have planes we have bombs, you are dumb and live with Mom" is a particular low point.

The political message is more overt in the album's second half too; ‘Come On Get Ready’ rallies against the Western military-industrial complex while ‘March of the Neoconservatives’, unsurprisingly, decries the mendacity of this ideology and its influence to date.

Too few bands have the guts (or the intellectual capacity) to articulate political messages beyond the blindingly obvious and clichéd and while The Pet Goats go far beyond this, the hectoring does get a bit forced. The final song ‘Wrong Hero’ is a bit flat, lacks conviction and definitely strays into unthreatening indie. Overall though ‘Operetta’ is well worth a listen; the first four tracks are great in themselves, promise much and they're definitely a band I'd like to see live.