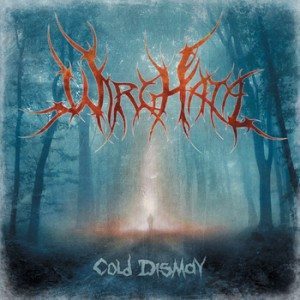 Out on October 29th through

Once again Blasphemour Records has found the diamond in the rough and released another spectacular album this year. First it was the find that is Losing Skin and now they have signed and released the debut album from the band WirgHata. Cold Dismay is a passionate and thrilling addition to the melodic death metal releases of this year and goes a long way to show that there is still life in this metal genre when combined with fine musicianship and a passion for the subject matter. Being a band from Siberia, WirgHata probably understand better than most the cold and harsh realities of life and I have no doubt that their cultural heritage plays a huge part in their musical acumen.

The album starts off in the traditional and appropriate death metal way with the instrumental intro 'Serene'. A quick haunting track that leads directly into the first proper song 'Through the Eyes of Serpent' which is a scorcher of an opening track. With the keyboards leading the mood and atmosphere, as they do throughout this album, WirgHata really push the boundaries of the melodic death metal sound. With a strong foundation created by the rhythm section of the band the barrage of sound is intense. When the opening vocals kick in, which are a mix of melodic screams and death growls the listener is already pulled firmly into the song. From the mid-song blast beats to the fluid changes into the melodic riffs this first song certainly proves what good musicians can do with melodic death metal.

As the album progresses so to does the band. The phenomenal track 'Winter Storm' allows the band not only to work their black metal side but also incorporates a more traditional metal sound to the song. Melding the different genres and making their style of melodic death a bit more accessible to the average metal listener help solidify WirgHata’s place in the genre. This and the appropriate use of the keyboards throughout all of the songs gives this album a bit of an epic feel and helps keep the songs fresh throughout the entire album. 'In the Sands of Solitude' is a haunting mid-paced song that acts a chilling conclusion to a cohesive story. The strong composition of this song is evident and the conviction in which it is played is admirable.

So the big question becomes what sets WirgHata apart from any other melodic death metal band? The answer is simple; they have created a sound that stands out as unique in an otherwise stagnant genre. What they have accomplished on Cold Dismay is a unique sound with themes and tones that can be felt as the songs progress from the intro to final 'Outro'. Maybe coming from Siberia lends to the darkened themes and the aggressive musicianship and if so I hope they stay there as long as possible to continue to release albums of this magnitude.

There will be a bit of comparison to Cradle of Filth and Dimmu Borgir which is appropriate as this blackened melodic death band has a sound that is comparable to both of those bands. Hell, with the significant use of keyboards and the snarled vocals they also have a bit of a relationship with Children of Bodom but don’t think for a second that the music that WirgHata is producing is anything but original. These songs have an atmosphere and energy that most have not seen in this genre in years and if WirgHata can keep up this pace we should be seeing solid albums from them for a long time to come. I will honestly say that spending your hard earned money on this album will not be a waste, this album satisfies!