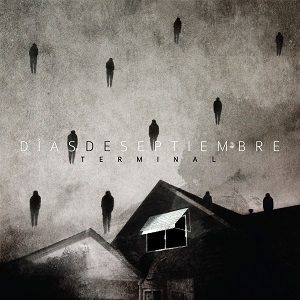 We are living in a wonderful moment in history to be fan of music, there is a lot of people creating great songs everywhere, even in places that we would never think we could find a scene, especially if we listen to Post-Rock. Musicians are daring to explore new horizons and include sounds they find on the internet as references at the moment of creating their own music.

Personally, I didn't think that there could be a Post-Rock band in Venezuela until the other day Dan told me about DÍAS DE SEPTIEMBRE (Days of September), a wonderful band from Caracas that has been playing all over Venezuela since 2008. It is composed by Edgar Cardenas (bass), Pedro Deniz (guitar), Christian Arana (drums, voice), Angel Negrin (guitar) and Mígliz Mena (keyboards, Vocals). Among their influences we can find to Explosions in the Sky, Mogwai, Radiohead, Pink Floyd, This Will Destroy You, Death Cab For Cutie, Russian Circles, Caspian and If These Trees Could Talk.

On November 3rd Días De Septiembre released their second album entitled TERMINAL. It includes 7 semi instrumental songs that for 41 minutes take us to a world full of emotions. They don't want to impose feelings through their songs; even the ones with lyrics are open to the meaning that every person wants to give them. In their concerts all songs are supported by visuals, creating a unique experience for the audience.

The first track is called 'Nostalgia', a song with the classic composition of a Post-Rock tune but perfectly adapted to their style. It starts with melodic guitars playing softly until it reaches half song and the rhythm starts to increase its speed while bass and drums get involved. The "Melodica", a kind of keyboard, give a special sound to this composition and while the guitars are louder a Piano sequence brings the perfect end to this song. In second position we find 'Luz', an exquisite song that in the middle of its tranquility introduces to us the magnificent voice of Migliz Mena, while she sings about "Lights in the sea" a rhythm of strident guitars and powerful drums fill the atmosphere and as they fade the third song appears, ‘Terminal’, instrumental track that follows with the rhythm of ‘Luz’ but turns it into a lovely melody adorned with tenuous electronic details.

'Ausente' is the fourth track, one of my favorites because of its melancholic feel; the voice of Migliz comes again to seduce us with its stunning quality. Its tone reminds me of a Swedish singer named Johanna Wedin because they are capable of making us float and travel through our own disconsolate souls. After those minutes of introspection 'En Transito' with its elegant ambient structure makes us get deeper into ourselves and enjoy every note of this beautiful song.

In 'El Desierto' the melancholy hits harder thanks to the amazing melody that flows from the guitars, drums and the smooth sound of the melodica. It creates also an intro to the last song, their masterpiece called 'Un Fin Premeditado' where we can listen to almost 15 minutes of greatness, they used all the resources they have, the voice appears as a mermaid's singing in the right moments while the mild distorted guitars, synths, reverbs, bass, drums and backing vocals create the perfect atmosphere to close this spectacular album.

Terminal definitely is a record that is worth listening to in its entirety and I'm sure that as soon as it ends you will press play over and over again as I have done since I got it.

Terminal is available for free in their Website or if you feel like supporting this band, you can buy it for 5 USD on Bandcamp.