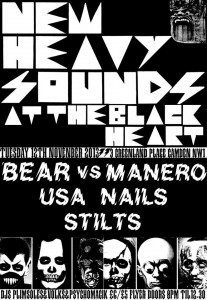 When I told a few people at work where I was going one older gent said wistfully, 'Camden to see a gig eh?', remembering "the good old days" when guitar music was in the ascendency and Camden wasn't full of latte-drinking pricks. Same old nostalgia, same old bullshit. Once again this gig proved that tales of the death of guitar music have been greatly exaggerated.

The Black Heart is hidden down an innocuous lane off Camden high Street; without the throng of dedicated smokers out the front we might have missed it. New Heavy Sounds are a club/label that unashamedly peddle "dirty, greasy riffage" and this gig ticked each box with a giant marker.

BK & Dad kicked off the night; a two-piece from Norwich they released their debut single 'Mundy' through Gravy Records in September. They set the tone and a very high standard with a voluminous set that would have had bass players in the room shitting themselves. (When you can generate this sort of aural tonnage who needs them?)

Guitar loops filled out the sound though thankfully they were used sparingly and never suffocated the riffs. There were occasional lapses into the kind of intricate but unlovable time sequences that characterize math rock, but the songs were primarily driven by energetic riffs rather than equations. 'Loggerhead' was a particularly catchy number and the delivery throughout was imperious; a raw, bludgeoning start to the night by a palpably uncompromising band that promises shitloads.

Next up were USA Nails; something of a DIY super group - with members from Mayors of Mirzaki, Death Pedals, Silent Front and others - they only played their first gig in June but are already a ferocious live act. Shit-heavy riffs pummeled from the stage while the vocals were not so much delivered as violently projectiled. They carried a real air of menace and reveled in the guttural churning they spewed forth. The pounding was relentless without ever becoming formulaic or monotonous and this had much to do with front man Steven's serial killer charm, and just the thrill of watching musicians able to unleash such fury with such precision. The vocals could have been louder but still a savage display by a force of nature. Three of their songs are available through Bandcamp; listen and love.

The night was billed as Bear Vs Manero's "EP Launch Show"; I reviewed The Bifacial before and suffice to say it's brilliant. They began with ‘Fluoride Frustration Face’, the explosive first track on the EP, and this set the tempo for the rest of the set. Bear Vs Manero bristled with energy and flailed about the stage as though driven by demons. Bass-driven riffs and slashing guitar attacks complemented Toms' vocals which mix parody, disdain and menace. As the set progressed they dispensed with the confines of the stage and wheeled into the crowd in various manic contortions.

By the time they played their final song - new track ‘Pigs in Blankets’ - they were in full flow, projecting a raw intensity and deranged abandon; a compelling live act. With their thunderously heavy riffs, devilishly catchy hooks and lyrical malice they purr like a cat, albeit a ferocious scratch-happy one.