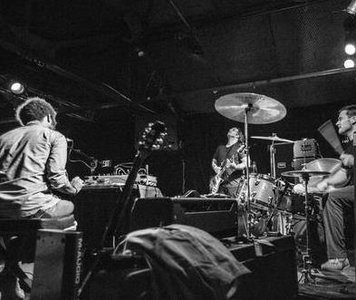 It’s debatable how much OM’s relative popularity (given the style of music they play) is down to Al Cisneros also being one third of now reformed Sleep but that’s not a matter for dwelling on. It can only be a positive thing that the Brudenell is approaching full capacity for an act that, especially on last year’s Advaitic Songs, have a fair few touches of the experimental about them. A doom gig this is not.

Just in case any doubt lingers about that, Mick Flower turns up just to hammer home the point. Performing in duo formation (but, it would seem, not as the Flower-Corsano Duo of which he is a part), Flower and his partner rattle their way through forty minutes or so of psychedelically tinged guitar drone. It’s all a bit like the drone record that Syd Barrett would have made if he’d turned up twenty years down the line. There’s an odd touch of country to some of Flower’s playing too, which is slightly baffling. Ultimately it’s the sort of thing that’s been done a hundred times before, and struggles to prove too exciting as a result.

In contrast, OM have few peers. That’s not because their sound is wholly unique, but because they have a single-minded dedication to evolution that has resulted in subtle, but significant alterations to their sound over time. This means that, over the course of this set, they travel from the realm of pure drone doom across into tracks that are almost exclusively made up of the hypnotic Middle Eastern music that has inspired their discography to date. Opener ‘Sinai’ is a good example of the latter, tumbling into existence with a pitter-patter and lulling everyone into attendance into the same spiritual trance.

Tracks from God is Good have a weightier air to them, but at the same time keep the mood tranquil. Only Robert Lowe (aka. Lichens, and formerly of 90 Day Men), who has become OM’s third member in recent times, is lost in a buzz of frenetic movement. Whilst others in the crowd rock back and forth, headbanging as if affirming divine revelation rather than as if worshipping riffs, Lowe manically thrashes at his array of percussion and over exaggerates each resonating note played on his guitar. Drummer Emil Amos and Cisneros himself, in contrast, both play with restraint, without sacrificing any power.

This restraint feels almost communal by the end, and the overwhelmingly positive round of applause the band gets emphasises this. OM is an exercise in devotion, with the band in audience being as a congregation of one.