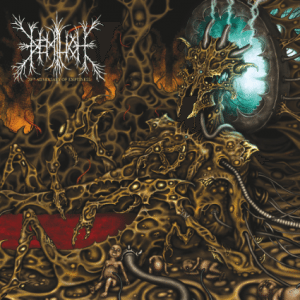 All bow before the mighty Toad King!

This will most likely be your first reaction when listening to Demilich, right after ‘what the fuck is up with those guitar riffs!?’ and ‘those melted face stains are never going to come out of the carpet!’ In short, Demilich are the weirdest, craziest, most original technical death metal band to emerge from the 1990s and now you can enjoy their full discography in one complete package.

20th Adversary of Emptiness features all of Demilich’s recorded material over the course of their history, along with a whopping 44 page ‘zine featuring lyrics, photos, interviews, reviews and song commentary. In short, if you were a big fan of the group’s one and only full-length studio album, Nespithe, then you absolutely have to get your hands on this double CD/3 LP package!

For those of you unfamiliar with the music, well... it’s not really all that easy to describe. Probably the closest comparison is something in Gorguts’ discography, but even that doesn’t prepare you for the alien-like atmosphere and twisted riffs that define this release. And if describing the instrumentation wasn’t difficult enough, explaining the vocals is an even greater hurdle. If I had to try and sum them up, I would say that they are the sound of a belching alien toad demon. That’s right. Belching. Alien. Toad demon.

All of this would be superfluous, of course, without fantastic songs to go along with the weirdness, and 20th Adversary of Emptiness provides by being absolutely chock-full of great death metal tracks. Opener 'When the Sun Drank the Weight of Water' is the perfect way to get acquainted with Demilich’s unique sound and Antti Boman’s notorious vocal style. All of the songs from Nespithe are stone cold classics, but it’s the final three tracks from the album that are the most memorable; just wait until you get to ‘that riff’ towards the end of 'The Planet That Once Used to Absorb Flesh in Order to Achieve Divinity and Immortality (Suffocated to the Flesh That it Desired...)' (every bit as epic as its title) or find yourself employing very unusual headbanging techniques in order to cope with the strange grooves that characterize 'The Cry'.

Perhaps the only downside to the release is that many of the remaining songs are merely demo versions of what can be found in far superior form on Nespithe (brilliantly remastered here, by the way). While this does make for an interesting listen, you really only need to hear these versions once or twice before making your way back to the album adaptations. With that said, there are three superb ‘new’ tracks (one newly written and two that the band never got around to recording) from 2006, with 'The Faces Right Below the Skin of the Earth' proving that, even after thirteen years, the band still had what it takes to create quality death metal.

20th Adversary of Emptiness is the quintessential Demilich collection. It serves as the ultimate package for fans and would be worth getting for the magnificent remaster of Nespithe alone. Do yourself a favour and listen to this timeless classic; even after all this time, there is still nothing that sounds quite like Demilich.