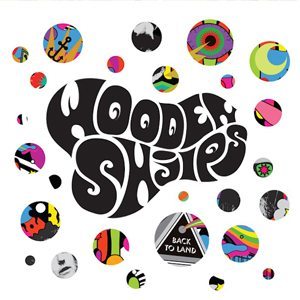 Out now on Thrill Jockey

Just chilling on a roadtrip. That's one way I would describe the feeling of San Francisco's psych-rockers Wooden Shjips' fourth album Back To Land. It's as if they've arrived down to earth after a long trip into space. During their first impressive singles and EPs, which were later compiled into Vol. 1 (2008) and Vol. 2 (2010), there was often a distinct atmospheric feeling. Think heavily layered psychedelic space rock with echoed vocals and groovy guitar solos sounding like coming from outer space, transmitted through the clouds and down to us here at earth. It's the kind of music you want to play on your biggest speakers and really tune up the volume for.

On Back To Land the epicness is gone, but has been replaced by a more accessible woodstock-psych vibe set by the opener 'Back To Land'. The band is performing in a less airy, noisy, raw and badass way compared to in their earliest material, but they're still staying true to their psychedelia and sometimes it even gets quite intense like during the highlight of the album 'Ghouls'. But in general everything is done with a more laidback approach. Vocalist Ripley Johnson neither sings nor talks, it's something inbetween. Like earlier there's often a distinct echo effect added to his voice which is so typical for Wooden Shjips' psychedelia.

What I'm getting tired of throughout the album is the repetitive drumming and organ tones, like in 'Other Stars', which is not leading anywhere. That's why I keep thinking of this album as a summer roadtrip. The experience of the trip is always pleasant in the beginning. You probably get the picture: You'll roll down the window, close your eyes, take a deep breath and enjoy the experience of heading somewhere new and far away. There's plenty of time to gaze out on the roads and the landscapes, and while that can be pleasant for a long while, nothing remarkable or surprising will really happen. Sooner or later you'd like to stop somewhere and explore a new place. Too bad Wooden Shjips never seems to get out of the car during Back To Land. It's a pleasant ride, but a ride is pretty much all it is.

I miss the noise. I miss the raw approach. I miss the kind of epic songs which makes me want to play this too loud to my neighbours liking. Next time, I hope Wooden Shjips will have finished their roadtrip and arrived at their destination to let all of their held-back-energy out. Meanwhile I recommend you to start from the beginning with their compilation Vol. 1 (2008), including epic songs like 'Shrinking Moon For You' and 'Clouds Over Earthquake', which is definitely a goldmine you should dig into.