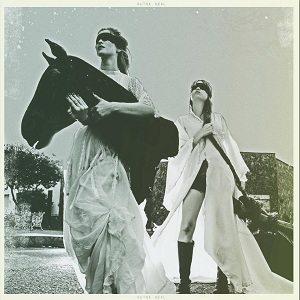 Around 9 years ago a guy approached to me in a gig I produced at the Likiliqui Bar of León, México and handed me a record of an instrumental rock band from Guadalajara, he was the drummer and said the band’s name was Sutra. I remember listening to this fantastic music over and over again for years! When I finally got to see them live I realized that they are not just another band, the atmosphere they create with the music is fascinating, you feel like you are floating in the smoothest cloud of your dreams, it is an experience that has taken them on tour to some cities of Europe and North America.

In 2013 Sutra celebrated their 13th anniversary and even when their line-up has changed over the years, we can listen to a solid band, definitely the best version of them. The way all the instruments mix and complement each other is magnificent; every single “noise” is necessary and justified. A confirmation of this is Real, their new album. It was produced and recorded by themselves in the legendary Guadalajara-based studio “9 corners”, house of the most interesting bands of the moment.

'Seré Tu Espejo' is the first track of Real and is a clear example of what Sutra’s project is about. Within its 5 minutes Andres Orozco, Gerardo Martinez, Wallace & Rodrigo Rico build a multiverse of psychedelic and electronic beats that collide with the drums and bass creating a melody of hallucinating electro-rock. 'Rother' begins with a peaceful atmosphere that after 90 seconds threatens to explode but remains calm for another minute and then a powerful crescendo accelerates the tempo, at 4:26 takes a short break just to prepare our mood for a more aggressive rhythm that closes this awesome song.

'Fluor' is a highly experimental melody that has some hints of jazz in its psychedelic composition, this mix create a mysterious atmosphere that surrounds us while listening to it. The following track is ‘Laera’, a really short and noisy interlude that is like an extension of Fluor and prepares our minds for the next piece. 'Erroneo' is a complex and powerful song that displays the abilities that Sutra has; in this one we can hear many layers of guitars, keyboards and other synthetic sounds melted in a dynamic harmony. Mil Lugares Aquí is another short interlude; it’s a good spot to have a rest before the next track.

'Real' is phenomenal, starts with some disturbing noises that imitate ghostly moans in a haunted house but stop right before a sampled female voice appear to deliver an intriguing message; after that, a calm atmosphere fills the room but soon enough it accelerates and we can hear the most amazing and dynamic melody of the album, the way the distorted bass is used to drive through the elaborated drums is fantastic, at the end the rhythm sound as an electric loop and when it seems like it´s over a flute plays it again a couple times to close what is my favorite track of this record.

The next piece is 'Pakal' an ambient song where a synthetized sound repeats over and over again while just a few other elements are added to complement it. 'Blue Phantom' is another example of the magnificence of sutra’s music. Its composition is complex and well defined, we can hear a more relaxed band, the bass line is awesome. 'La Caja Negra' is the last interlude; it lasts only 35 noisy seconds. 'Buscandome' provides almost 4 minutes of pulsating and dissonant sounds that mix in an eclectic way just before the peaceful 'Realeza' closes this emotive record.

I’m sure that with this album Sutra will get the respect they deserve and their music will be played in every corner of this chaotic world.