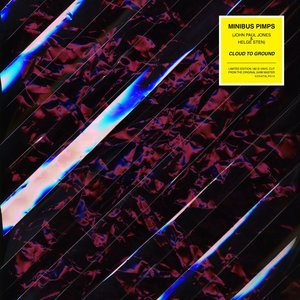 A collaboration between legendary former Led Zeppelin bassist John Paul Jones and the, equally legendary - at least to those familiar with his work, sound manipulator Helge Sten shouldn’t really come as too much of a surprise. Jones has collaborated live with Supersilent, the ever-shifting Norwegian avant-garde jazz collective that Sten is a crucial part of, and has made no secret of his interest in more experimentally minded music over the years.

Assumedly his interest in Supersilent has also led to, or developed alongside, an appreciation of Sten’s solo works under the Deathprod moniker. Certainly Minibus Pimps shares certain common ground with the music of Deathprod, although Cloud to Ground lacks much of that project’s darkness in favour of a more soothing approach. There are shades of 70s Deutsche elektronische musik, and especially the mid-period works of Tangerine Dream, all over this four track effort. Then again, Jones has apparently been experimenting with computer music since that time, so this should not be such a surprise.

Opener ‘Black Aurora, Pt. 1-4’ is the real highlight here, with bubbling synth melting into widescreen drones and crystalline soundscapes. The track’s sixteen minute run time gives it a more expansive air than the three shorter tracks that follow, enabling Eno-esque drapes of ambience to fully accentuate their presence before slipping into the ether. The three tracks that follow come across as mere sketches in comparison, but each has its own merits, providing a seamless collation of Deathprod’s icy dark ambience with retro electronic aural sculpting.

Ultimately, the flaw with Cloud to Ground is that, for listeners familiar with this style of music, it doesn’t offer anything particularly new or unique. Perhaps Deathprod fans may well find themselves wishing that Sten had finally produced a new solo record to follow up the classic Morals & Dogma, which is now a whole decade old, instead. There’s always the hope that some Led Zeppelin fans may check out Minibus Pimps thanks to the involvement of Jones, and they may well be blown away by what they hear. For ambient music aficionados, however, this is solid without being spectacular.