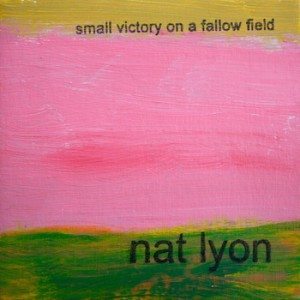 With Nat Lyon’s new album Small Victory On A Fallow Field, the more strict and rigid approaches to recording which ensure cleanliness and precision have been eschewed for a more organic and spontaneous procedure. Lyon, who’s music some have described as anti-folk and pastoral-punk, also presents us with a set of songs which gradually build an overlying narrative of imaginary characters who rail against the injustices of our world.

“I tend to write about the place and time that I occupy- but the absurdities of life go into a blender and are rendered back out as an imagined reality. The characters on Small Victory On A Fallow Feld include a proto-hipster, a suicidal school teacher, an anxious government data miner, and dogs that are desperately trying to learn the English language.”

‘New Haven Again’ starts all detuned and drone and develops into a kind of CBGB’s punk. There’s space too; as in implied space, with big reverb and the chime of the guitars. Some of these tracks are very short (Ashford To Eastford’)…almost vignettes. Some are more weighty: ‘Every Bad Day’ extends the space-rock feel, but imbues it with darkness, “Insurgents building fires, to throw up a smoke-screen”….. Lyon creates a storyline which suggests the classic disillusion of the working man as portrayed by, for instance, Michael Douglas in ‘Falling Down’; a frustratingly banal life being the flip-side to perceived conspiracy, disappointment, suppression and institutional subterfuge.

It’s a peculiar mix lyrically: sometimes with very specific narratives; sometimes impressionistic and disjointed. Musically, the album draws on the spirit of late 60’s San Francisco, 70’s Berlin and early 80s Athens, Georgia; but squeezes it together in the palm of its hand to produce a more contemporary, if retrospective-feeling, take on alt-pop.

Apart from the darkness, motorik rhythms and curled-lip vocals, there are also little moments of beauty. ‘Landseer Frequency Artifact’ is a quite stunning bit of neo-ambient post-rock. Guest musician Pulco’s deadpan refrain of “stray dogs” over a beautifully spacious soundscape of white noise, spoken-word and dark plucked guitar is one of the highlights of the album and makes explicit the sonic invention and sound-design which quietly underpins the more ‘traditional’ songs. Lyon, who is responsible for a majority of the recording and production on the album, is assisted by engineer Chad Matheny and the subtle interplay of found-sounds, odd noises and the more melodic instruments is testament to their production skills.

‘Charlie’ drives hard with the kind of bassline and beat favoured in Manchester, circa 1980. ‘His Name Was Ken’ shimmers and swerves like an Echo And The Bunnymen/Violent Femmes collaboration. These are all good things, by the way. This music, like every cultural artefact at the moment, wears its influences on its sleeve, but does so in a way that creates something unique through the particular combination of said influences.

‘Western Fiction’, the closer, returns to the earlier glories of ‘Landseer Frequency Artifact’, with chiming guitar and a voice, which actually sounds like William Burroughs, stating “The stars are coming out”.

Whilst a majority of the album will appeal to krautrock and post-punk devotees, of which there are many, there’s enough of interest on here to draw in listeners with a curiosity for skewed and quietly subversive songs by a singular talent.