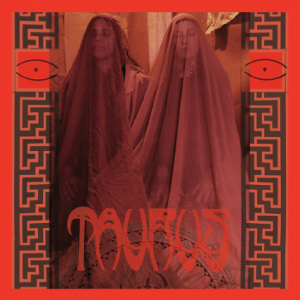 Out on April 1st through Bandcamp

Taurus are a psychedelic dark doom, drone duo from Portland consisting of Stevie Floyd of Dark Castle and Ashley Spungin formerly of Purple Rhinestone Eagle. Together they have produced a spiritually godless cathartic audio masterpiece called No/Thing. With the help of producer/engine ear Billy Anderson, who also does the vocals on ‘Increase Aloneness’, its fair to say that No/Thing will take you on a nightmarish doom/drone audio roller coaster of a journey.

Paranoid screams and black mass rumblings will seep through you cranium delivering chilling avant doom/terrorscapes of suffering, agony and torment but where there is torment there is tranquility and No/Thing is a well balanced album exploring both aspects with each track blending together seamlessly. There is also the chance of having blood streaming from your eyeballs when wearing headphones, you have been warned!

If you are aware of Dark Castle, which you should be, then you will know the monstrous vocals Stevie can produce. 'No Thing Longing... Human Impermanence' is your first taste of his amazing vocal range.

There are also some hypnotic calm vocals that could be either Stevie or Ash, which just adds to this chilling heavy doomscape track that flows into the second track 'Lives long for Own', which is more of the pounding drums and death metal riffs, fast and relentless torment. There is no escape from this fleshy prison.

If you have not went mad yet then 'Set Forth on the Path of the Infinite' should bring back some balance with it calmer flow but not really, you are always going to get dragged back in by those hypnotic vocals and tribal drums. White Noise meets Hammer house of horror. I would love to know what the woman in the background is saying and yes I do like a ukulele.

Even though I enjoyed the tormented screams and dread of the album so far I was about to be blown away by 'Increase Aloneness'. This is the longest track on the album and by far the best, with guest vocals from Billy Anderson. The heavy riff and excellent drumming from Ash should appeal to most metal fans, myself included but deep down I’m a spacehead and any spacehead will enjoy the Hammond organ arrangement, synth and beautiful vocals on this track. We really are just dots.

'Receed' is the last track and the closest I have heard to the great band White Noise. More tribal drumming, synth, organ and evil demonic vocals of Wrest (Jef Whitehead) of Leviathan, making this a fitting end to an inspiring project by Taurus.

No/Thing is an insanely beautiful explosive piece of musical art that explores life and inevitable death, something that nobody can escape from so dry up those blood stained eyeballs and buy it.