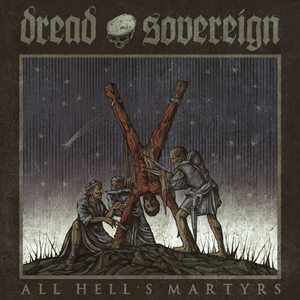 As far as the opening minutes of their debut, Dread Sovereign fires a warning shot when it should have unleashed a lethal volley with All Hell’s Martyrs. Call it personal bias, but with the strength and sheer meatiness of near-opening tracks 'Thirteen Clergy' and 'Cthulhu Opiate Haze' it’s a wonder why metal bands have not allowed droning, sample-based noise intros to finally go the way of the mainstream rap skit and be done away with completely. This seemingly nitpicking detail highlights the main problem with the album, though: it seems as though Dread Sovereign have not yet fully realized what they do well and how to bring that to the forefront.

The track 'Thirteen Clergy' would have been a confident bomb-drop of an opening. It highlights all of the band’s strengths with a condensed, hook-filled demonstration. While the vocals and guitar are both cleaner than a lot of contemporary metal fare, Dread Sovereign swaggers through a demonstration of how you create heaviness without simply turning up the gain. The drums hit like a caveman slamming down dinosaur bones and the bass is heady and rich. The band is not breaking any new ground as they flirt with the more power metal leanings of a traditional doom sound, but once the song hits its undeniably juicy hook of a chorus it further strengthens the argument that homage done with due diligence can be as satisfying as innovation. 'Cthulhu’s Opiate Haze' layers on even greater heaviness, giving teeth to the already satisfying anthemic quality of the opening through greater vocal grit and a sludgy malevolence.

And that’s where Dread Sovereign starts to lose the plot. After another drone interlude distraction, Dread Sovereign hits similar notes throughout the album without reaching the heights (or depths, if you prefer) of their surefooted opening salvo. Not only does the band retread their own ground, the pleasantly light touch of the arpeggiated guitar sweeps who step aside for the crushing rhythm section, but the ground of so many bands before them. It’s no surprise that the vocals of Alan Averill are the consistent star of the music here, given his pedigree in Primordial and Blood Revolt. It’s difficult to separate his iconic voice from his own legacy, however. Dread Sovereign seems to lack the fully-crystallized vision of those other bands, and it becomes difficult not to let the mind wander away from the music when it seems that several of the songs’ run times could have been cut in half. It may be unfair to compare an artist’s new work to their old, but it also seems inevitable and considering the strength and, frankly, fury of Averill’s career; it is difficult not to want more from All Hell’s Martyrs.

That is not to say that the album completely falls off the map. There is plenty here to excite the listener, mostly for what is to come from this band. Indeed, the album is bookended by strong pairings of songs - coming out of a somewhat meandering middle section to return to the same commanding rhythm that initially welcomes the listener into the album. The album closer, ‘All Hell’s Martyrs, Transmissions From the Devil Star’, specifically drags the band’s established tropes of dark, heavy metal classicism, and drags it screaming into the stratosphere - totally exploding the formula with stunning results. A post-rock slant collides into what otherwise threatens to slip into the well-trodden territory of puritan-immolating, left-hand-path-obsessed-doom, offering a refreshing breath of new life into the album that leaves the listener in a sort of ecstasy and with a hunger for what Dread Sovereign will do next.