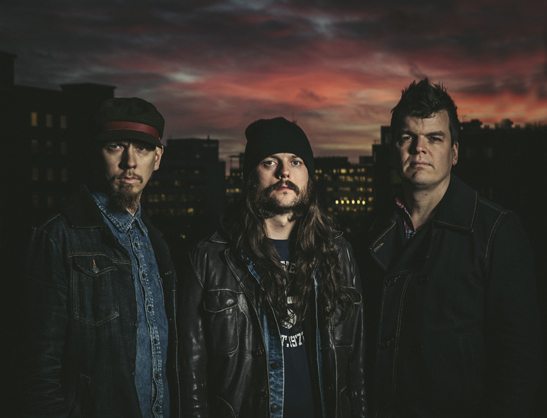 Monolord's debut album Empress Rising is one of those releases that just completely blew me away when I first listened to it. This resulted in a very positive review and I was eager to find our more about this Swedish heavy psychedelic fuzz creating doom band. I asked guitarist Thomas V. Jäger a bunch of questions.

(((o))): Can you introduce Monolord to our readers please, like who’s in the band playing what?

(((o))): You play heavy crushing doom but with a huge psychedelic older 70’s feeling to it. Would you agree with this?

Thomas: Yeah I guess so. As said in other interviews, we didn’t really decide what genre to play. It is just a classic ‘go with the flow approach’.

”Hey, let’s tune down to b and play some heavy stuff?”

The result is this album.

(((o))): Let me just take the opportunity to congratulate you with your album Empress Rising. It’s an amazing release and I’m sure it will end up high on the end of the year lists, especially with fans of doom. Did you expect it to be received so well?

Thomas: A massive THANKS! We felt that the songs were really good and that was one of the main reasons we decided to make more of it than just a side project. The first song we wrote was ‘Empress Rising’ and that set the tone for the rest of the songs.

(((o))): Is there an underlying message you want to tell us with Empress Rising, or was the whole purpose of the album purely to melt our faces in a hypnotic doom induced trance?

(((o))): How does a Monolord song develop? Do you guys simply jam endlessly till there are some riffs that just feel right or is there a person in the band who writes everything or parts of songs and then takes these into the practice room?

Thomas: I have had ideas for a doom band since… well maybe almost 10 years back.  The main riff for ‘Audhumbla’ is about 6 or 7 years old. It was in my riff vault and was dying to get out.

The first 10-15 minutes (or more) at rehearsal, we jam. That sometimes leads to parts that we use. Or, someone brings a riff or a song to the rehearsal room. We play it through and everyone is putting their ideas and creative touches into it.

(((o))): Can you tell me something about the gear Monolord uses? What sort of effect pedals for example? Are they custom made to create the heavy fuzz guitar sound?

Thomas: Mika and myself really like pedals and effect boxes. But we have no more room on our pedal boards. The main fuzz pedal I use is the Boss hyper fuzz. It just sounds evil and I feel good every time I stomp it in. And I rely on my Suzuki Flying Vee’s. Mika mostly uses a fuzz by Death by Audio that really fits his sound perfect.

Thomas: I was checking EasyRider Records out on Instagram at first. I contacted Daniel, mailed him the first demo version of ‘Empress Rising’. He said to come back when we have more songs. I sent a rough mix of the album a few months later and he liked that a lot. And then it was on! 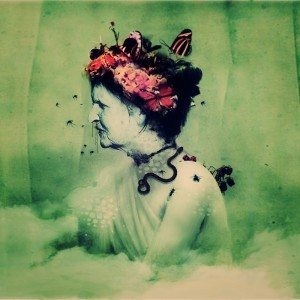 (((o))): Who made the cover art for Empress Rising and what particular Empress does she depict?

Thomas: The cover was made by this awesome dude called Nik Dudokovic. We had some ideas that we mailed him. He sent us back an idea and we went from that to the whole artwork. Lots and lots of mail were sent. It was almost insane at some point. But it turned out really really well. We had a feeling of this old hag that he made come to life perfectly.

(((o))): What is the Swedish music scene like? I’ve noticed a lot of good and heavy music coming out of Sweden lately, but also from other Scandinavian countries. What’s going on over there?

Thomas: We get this question a lot. I really don’t know why Scandinavia has so much good music. It is exploding on so many levels and in so many genres. I don’t have any good answer. But it is actually pretty easy to get a rehearsal room. That might be one answer. The one we have is not big, or fancy, but we do all our recordings there.

Thomas: Nothing really. We don’t eat meat. Animals are friends, and we do not eat them.

Thomas: Black Sabbath. With Bill Ward. Without Bill there’s no Sabbath. DO YOU HEAR ME?!? BILL SABBATH!!!!

(((o))): If you were asked to organise your own one-day festival, who would you ask to play?

Well actually, we are playing our first gig, the release for the album in Gothenburg, the 12th of April.

Thomas: There are some plans in the making but nothing for your ears or eyes at this moment. But, we wanna tour everywhere and all the time. Stay tuned for that.

(((o))): Thank you very much for your time! All the best with the new record and I hope to catch you live at some point!