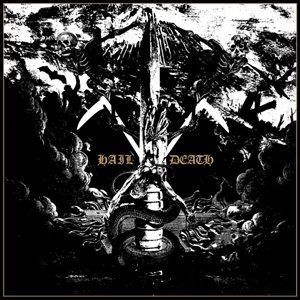 Out on May 23rd through

As the maelstrom of American black metal bands only seems to grow, amongst the fray sits Black Anvil, a malicious force from the filthy streets of New York City. In the four years since their last album, Black Anvil have been tearing their way across the US and nearly every country across the globe. On their new record, Hail Death, the band very firmly places their stake in USBM and black metal at large. While it seems that the old and new European gods of black metal are resting on the merits of yesteryear, Black Anvil are progressing through the means of America’s own history.

For a black metal record to sound more like concrete and Wall Street than the dark, sprawling forests of Norway may be blasphemy to some, Black Anvil own up to their geography and history. The band makes note of heavy influence on the record from Metallica’s Master of Puppets and KISS’ Destroyer. And Hail Death is one fucking behemoth of a record, clocking in at just over seventy minutes. Not a single moment is wasted: every second is filled with terrifying, filthy metal.

The album opens with ‘Still Reborn’, a pace setting track that leaves nothing to the imagination. Not only does it foreshadow the many things to come throughout the record, it also sets the stage for a narrative that runs throughout the album. Reading between and within the lines, Hail Death appears to be a celebration of rebirth in the welcoming arms of Satan, and the embrace of individual and societal death as a means to an end.

The record communicates this in only the way that black metal can. The influence of classic black metal is present in the muddy guitars and live-sounding production. The throaty screams and gang vocals throughout the album are well-suited for the overall vibe, while thick, heavy drums force the horde onwards. On the middle track ‘Until The End’, all of Black Anvil’s alchemy twist together into a chugging, malicious progression with the hate-filled chant, “Total fucking war!”

The album’s final track- the massive ‘Next Level Black’- is the headiest blend of all things Black Anvil. It doubles as a Satanic rites of initiation and the apex of the album. There are elements present from previous touring mates Watain: charging progressions expertly interspersed with epic, fist-raising passages of sludgy guitars. The track closes with a deep and heavy nod to black metal’s doom brethren. When I say heavy, I mean it. The song is pure evil, and a fitting conclusion to Hail Death.

While 2013 harbored some incredible releases for American black metal, among them the likes of Lake of Blood and Fell Voices, 2014 has already set a breakneck pace for USBM. Black Anvil continue the turbulent pace of American black metal with Hail Death, a massive record with more than a lot to offer. It is an arresting, hate-filled misanthropic taste of New York City and the American dialogue of black metal.