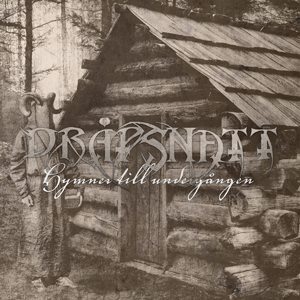 I have owned the original of this album for some time now. I first heard of Dråpsnatt from a friend of mine here in Austin, who picked up this album from reading a blog article on the band. The first thing that got me was the awesome album art. An ominous figure in the woods, standing next to an forbidding cabin; great! Listening to the album I was taken in, their songs were atmospheric and dark. Their lyrical themes are based on folklore and somber tales of things hidden in a feral forest. So they have checked all the boxes off on the black metal epic list.

Hymner till undergången is a great record. I personally am glad they decided to reissue this album. The tracks are monstrous hymns to ancient warriors and their battles, tales of stygian gods, and wintery foreboding mountains.

'En Ensam Sol Går Ner' opens the album with a folkish polka which erupts into a dark black metal tirade. From there the album just erupts into black metal darkness. The second track 'Arvssynd' really sets the tone for the rest of the album, straight forward epic atmospheric black metal. So much is contained in this album. The production is awesome, the vocals are well done, and the musicianship of Dråpsnatt is stellar.

Dråpsnatt's theme is to put out straight forward atmospheric black metal and they have succeed in this album. No track is boring, just really awesome black metal. 'Mannen I Min Spegel' is exactly the definition. Acoustic underlying abrasive black metal with a chorus of clean vocals. The keyboards hint of giant misty woodlands and great atmosphere.

The reissue of this album was a great choice, really defining the sound of Dråpsnatt and the bonus song 'Juvret' bringing excitement of what is to come for Dråpsnatt. Which of course is more fierce enormous black metal sound.

I am looking forward to more releases from Dråpsnatt, there take on black metal is forward. Dråpsnatt really gives the listener exactly what they say, straight forward black metal filled with breathtaking and wild emotion. Highly recommend getting this album and with it being reissued, it is worth picking it up again for the added goodies and a limited edition vinyl.