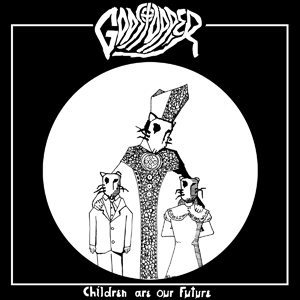 When Godstopper released their first demo, Empty Crawlspace, it was a big deal. Well, it was a big deal with bloggers and subterranean, archival-minded music freaks. The band’s initial offering, which was quickly followed by the expanded and even more incredible full-length What Matters, proved that there were bands out there in the underground that were making a mockery of the notion that “everything has been done before”. While the band, criminally so, is not yet a household name among experimental-loving noiseniks, there is a certain amount of expectation built up ahead of their release of their newest EP Children Are Our Future. Those expectations are certainly met, although sadly they are not shattered in the way audiences might have wanted.

Part of the problem might be that the opening track, ‘Andy Boy’, makes good on all of the band’s previous promises of angry, noise-rich, sludgy noise rock and raises the stakes. This track is easily the most seamless, muscular example of the band’s ability to crossbreed genres and styles at a disrupting pace that excites and disorients. The noise and seething anger are there, but the band’s secret weapon has always been their hooks! This track has hooks, and could easily be the band’s best candidate to date for the distinction of “Most Likely to Be Considered an Earworm”. Granted you have to be a bit of a fringe weirdo to consider this music catchy, but if you number amongst the cult of sludge extremists this is downright poppy in the best way possible. It is also the band’s closest track to being full-on metal, with blackened vocals and a grinding groove that threatens to out-future Mastodon at their own prog-sludge game.

Immediately after, you want to put this track on repeat, and that sets the rest of the EP for a hard sell. Follow-up track ‘Death’s Clothes’ is incredible in how opposite its charms lie alongside ‘Andy Boy’. It is a trudging, sparse, doomy track that fills out its nearly 7’30” play time with snaky confidence. The track exclusively features rhythm and vocals until around 3 minutes in, the chunky bass and caveman drums supporting the melodious grit of Mike Simpson’s voice in a way that bleeds into the haunting chimes of guitar leads that are over-driven and imbued with cavernous reverb. The track is an incredible counterpart to the chunky, immediate opening track, and if this were a simple 7 inch the release would be a triumph. But then there are two more tracks.

And these are good tracks, too. That is what needs to be made clear. Both ‘An Old Photo’ and ‘Young Queen’ are classics in their own rite and true to Godstopper’s entire aesthetic. They are melodic while still bristly and angular. They are tightly-arranged, yet sprawling in their sheer heaviness. When stacked up against the opening half of the EP, however, there is a slight case of listener fatigue. In order to follow the one-two punch of the opening tracks, the next two would need to be something really special. Instead there are two tracks that are merely “very good”. This might seem like a strange complaint, and it honestly may have been fixed by simply reversing the order of the tracks. But this is how the EP is laid out, and while the anthemic closer ‘Young Queen’ throbs with distortion while soaring in its triumphant melody, it still falls flat.

All said, though, if this is a sign as to what we can expect from Godstopper in the future it is an exciting one. The band has not lost its ability to create songs that appeal to both the darkness and light of its listeners, offering supreme slabs of juicy harmony within a coating of fearsome sludge. Perhaps the disappointment is merely an inevitable response of a member of Godstopper’s cult crying for total transformation and receiving only minor transcendence.