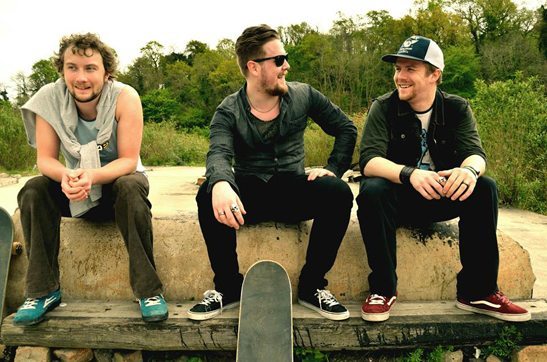 Hair Of The Dog

I was lucky enough to come across Hair of the Dog in February 2014 while looking for a band to review and did I find a gem? Bet your ass I did. Not only have they been picking up lots of gigs this year they have just been signed by a very cool label, so not a bad year so far for this local Edinburgh three piece. This interview is an insight from brothers Adam and Jon Holt and Iain Thomson into the life of the Dog.

(((o))): You have just signed to the German label Kozmik Artifactz, can you tell us how this and Hair of the dog came about?

Adam: Yeah, we’ve been playing music together for the better part of our lives. A lot of that has been musical exploration and maturation. With Hair of the Dog we’ve just taken everything that we love and that inspires us to play music and rolled it into a band that is primarily for us; the fact that others seem to be diggin’ what we are doing and support us is extremely humbling and of course deeply encouraging.

We knew when we started to write the debut, in late 2013, that we were onto something special because there was a genuine excitement between the three of us; something that had been lost along the way within various other projects we were involved in. It felt very natural and took us back to a time when we were all much younger; just jamming all night at Iain’s house until the sun came up.

When we had the record finished we did what every band does; we sent it out to be reviewed, we sent it out to some labels and we started to gig as much as we could playing for as many varied audiences as we could. After a few months, we had gathered quite a bit of interest towards the record, which is a strange situation to be, but Kozmik was for us a no-brainer. Kai, his team and the bands that make up the Kozmik family all share our ethos towards music; so again it just felt like the right step for us to take.

(((o))): Kozmiik Artifactz specialises in vinyl releases and your excellent self-titled debut album is about to be released on vinyl, was using this medium something that the band had planned, especially with vinyl sales doing so well at the moment?

Jon: Not really planned, but it is definitely meant to be.

Adam: Definitely, I think our sound and vibe lends itself perfectly for vinyl, but it was never in our plans to do a vinyl release. However, now that Kozmik will be giving our record the vinyl treatment, we are very excited. This gives people another way to engage with our music physically, which is so important; the ritual of buying physical music, taking it home, unwrapping it, sticking it on and enjoying the music, the art and the lyrics etc – that’s what excites me.

(((o))): With the ever increasing minefield of genres and Kozmik Artifactz being a label that supports stoner and psychedelic rock bands, what genres do you think best fits Hair of the Dog?

Jon: I’ve always said we are a rock band. We play heavy songs and lighter songs but the important thing is to keep each song as musically interesting as we possibly can. I don’t like the idea of being tied down to a genre. Why only play one type of music when you can play anything you want and really get creative with it.

(((o))): You have been doing lots of gigs up and down the country this year, are there any venues that have stood out as being memorable on the Hair of the Dog live journey?

Iain: The Moorings Bar in Aberdeen and Monty’s in Dumfermline.

Jon: Yeah, the Moorings in Aberdeen. We always have fun up there. It’s a great bar and venue. It’s recently had an overhaul done to the stage; the house drumkit is one of the best kits I’ve ever played. Plus the beer is cheap!

Adam: The Moorings is always a blast to play, we have friends up there who play in bands such as Bisongrass and [ ] (pronounced Wall), so it’s always awesome to see them, have some beers, have some more beers and rock out. Another great gig night is the Bunker in Edinburgh. It’s a skate-night in Studio 24 which takes place on a Wednesday night. As skateboarders, we were in a sort of heaven; playing our music then getting to skate some killer ramps!

(((o))): I read that you are working on a second album at the moment, do you have a process that you use when writing new material and are there any avenues that you never visited on the self-titled album that you want to explore now?

Jon: Adam comes in with the songs, the riffs, an idea and we all just jam it out. We like to keep it pretty organic and jam session led; it’s how we’ve always done it, since we were in our early teens.

Adam: That’s the best part about having two people in your band that you’ve grown up with, both musically and physically. I can just come into the studio with a riff or a full song and without having to sit down and learn we can just crack into a jam. As Jon said, that’s how we’ve always worked, so that’s how we are approaching the follow up record.

As for the follow up itself, well, it’s shaping up to be a bit of a monster. We never pigeon hole ourselves to one sound when we write an album, so we always just write songs that we want to play and hear be those big riff heavy grooves, or more laid back melodies.

Adam: A lot of people don’t know this, but Iain is a fuckin’ wizard on the trombone! We could get some jazz-trombone on there? 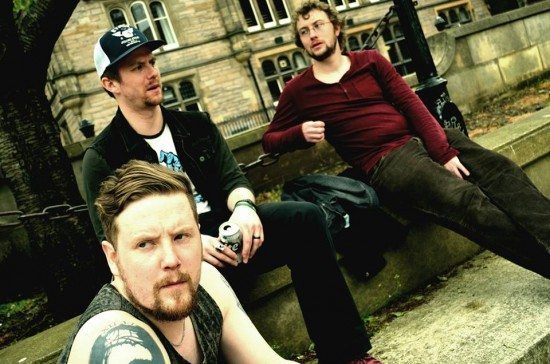 (((o))): ‘Empty as the Wind’ and ‘Ships in the Night’ are two of my favourite tracks from your first album. They are both very different, one blends all the musical elements of the band together so well and the other is pure bluesy bliss. How hard is it to create two gems like that?

Jon: Those two tracks sort of wrote themselves once we were playing them as a band.

Adam: I wrote the main riff for ‘Empty as the Wind’ the way I do with most, humming it as I walk around Edinburgh. This particular time I was en-route to our studio, so when we got in I was like “quick, I have to work out this riff!” Minutes later we were blasting through the main riff of ‘Empty’. After about half an hour of jamming we had the majority of the song. Then, by twiddling around, I came up with the big end section that builds up. When we jammed that for the first time, we all just looked at each other grinning from ear to ear; we then played it over and over again just for the joy of playing it because to us it sounded awesome!

‘Ships in the Night’ was slightly different because I had the majority of the song already mapped out, so we just jammed it, taking note of any improvisations that added to the song; one of which was the line “I’m waiting here for you”. Even when we were recording the music for ‘Ships’ I didn’t have any other lyrics than that one line. After the first day of recording, having heard the track all day, I went home, got my guitar out and the lyrics just started to spilled out of me; it ended up being one of my favourite tracks on the record.

(((o))): Glasgow has had a well established music scene for a long time now, so what are your thoughts on the Edinburgh music scene and are there any local bands that you would recommend we listen to?

Jon: Check out Lords of Bastard and Tommy Concrete and the Werewolves

Iain: Vasquez are great, check them out!

Adam: The Edinburgh scene is thriving at the moment. There are loads of gigs on each week and there are a lot of great bands emerging all the time. This is however, in my opinion, both a blessing and a curse. It’s great to see so many awesome gigs in my beloved city, but too many gigs can weaken a scene and too many bands fighting for the same audience can ruin a genre.

That said, one company that is doing a much-needed service to the Edinburgh scene is Pisschrist Promotions, run by Ewen Cameron. Pisschrist bring some of the best and most respected stoner, sludge and doom bands from around the world to Edinburgh and gives local bands the opportunity to support them.

As for local bands, again I would say to check out, Lords of Bastard. They are one of my favourites; I have their album on in my car quite frequently; they have a really unique sound, which live is very mesmerizing. Also, Phantom Riffage from Perth; I’ve been a fan of Riffage since I left home at 16 and moved to Perth, they were a big influence on me.

(((o))): You all have a love of 70’s Rock, what was the album that influenced each of you to become musicians?

Jon: It sounds mad but I remember listening to tracks like Robert Palmer’s ‘Addicted to Love’ and ZZ Top’s cover of ‘Viva Las Vegas’, Run DMC’s ‘Walk This Way’ when I was 10. They were on the “best rock album in the world ever” or something like that. Me and my mate would air guitar and drum along to these tracks completely oblivious to the likes of Deep Purple and Sabbath who were on the same CD. That’s what made me want to play drums loud and fast. Over time I learnt about Bohnam and his style has always been my biggest influence. Heavy groove!

Iain: A Frank Zappa “best of” album called Strictly Commercial; got me hooked on Zappa for life!

Adam: When I was 8, I was taken for my first guitar lesson. My teacher was just an older kid from a local high school and on my first lesson he taught me the intro to ‘Hey Joe’ – I’m a fast learner! Hendrix got me hooked on guitar and music, but when I discovered Zeppelin months later, it opened me up to the never ending possibilities of music. Their album Physical Graffiti embodies this; from the bold ever-changing riffs of ‘In My Time of Dying’, to the gentle masterpiece that is ‘Ten Years Gone’, its perfection!

Adam: BOB Fest is a total fuckin’ riot, I highly advise anyone with the opportunity of going, to do just that!

Other than recovering from BOB Fest, we will be playing more shows throughout the country; but our main focus at the moment is making sure we deliver a follow up record that we are again proud of.

(((o))): Thank you Hair of the Dog for taking time out to do this interview.

It’s been a pleasure talking to you!

(Credit: Hair of the Dog band photos were taken by Alan Swan)