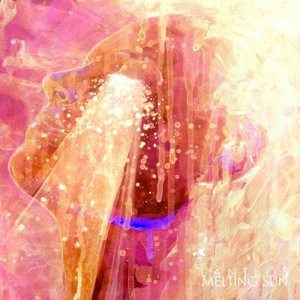 Much is made from bands’ decisions to change their focus across the span of their career. When a metal band, especially, releases something that - brace yourself - would be difficult to even describe as metal the response is often depressingly predictable. Cries of “Judas!” to Bob Dylan all over again for daring to pick up an electric guitar. These reactions usually die out, thankfully, and the camp of devotees always remain loyal to their favorite artists for making bold moves. The fallacy of this entire pattern is that the decision a band makes to change really isn’t a decision at all. A worthwhile artist is constantly changing because worthwhile people are constantly changing. Markus Siegenhort, the primary force behind Lantlôs, has unveiled a new peak in his career with the boldly progressive sound of Melting Sun.

Lantlôs has always been a difficult band to pin down. Their stylistic crossbreeding and association with Neige (most notably of Alcest and formerly Amesoeurs) often lumped the band in with those bands and the nonsensical “blackgaze” term that mostly just highlights either the limitations or uselessness of genre terminology. Here especially, Lantlôs is even more difficult to pin down. This album is being marketed to and critiqued and consumed by a largely metal audience. This creates a certain cognitive dissonance, though, that has been a large point of discussion. When is a metal band only considered metal based on its own history or, more arbitrarily, by the label that releases the music? It is so easy to fall into this rabbit hole of what a band is not, and one reason Melting Sun is so compelling is that it inspires a much more rich dialogue in discussing what it is.

The album is an amalgamation of styles, which is not out of step with Lantlôs’ previous output. The most easy sound to pinpoint is that of the sort of soaring post-rock that has been enjoying an unimpeded momentum since the early 2000s. Anchored by a bed of heavy groove, the shimmering guitar work places itself alongside the stadium heft of most of the familiar heroes of post-rock such as the tremolo-heavy Explosions in the Sky. What sets Lantlôs apart from simply being a metal band that became a post-rock band, however, is the seamless transitions from these triumphant passages to more cut-up, aggressive moments such as in ‘Melting Sun IV: Jade Fields’. There are sudden neck-breaking slams from the water-droplet arpeggios into a grinding mechanical, notably metallic sound. The band moves through these, as the numbered track titles suggest, as an orchestra plays through a symphony. Each movement is connected, even if that connection is through the disjointedness. The pieces lock into place, however, especially with Siegenhort’s unnervingly restrained vocals throughout.

Siegenhort’s replacing Neige as vocalist for Lantlôs provides both the band’s greatest and most refreshing shift in sound. While Neige has long been known for his ability to transition from clean, airy vocals to inhuman shrieks, Siegenhort sings in a consistent, graceful tone. Even in the album’s heavier songs, there is still a constant presence of his voice. He sings in a slightly deeper register than Neige and lends an amount of even confidence throughout the album that glues each piece together. Whether drifting through the acoustic, reverb heaven of ‘Melting Sun VI: Golden Mind’ or the melodic crush of ‘Melting Sun II: Cherry Quartz’, Siegenhort’s voice acts as a guide through the labyrinth of styles and textures that complete the solid whole of the album.

In the end, the argument over whether or not this album is a “metal album” is a useless one, as useless as most newly-invented sub-genre tags because in the constant panic that people feel when they rush to categorize things brings the overall community away from what really matters: unrestricted creativity and passion. Lantlôs clearly has plenty of both.