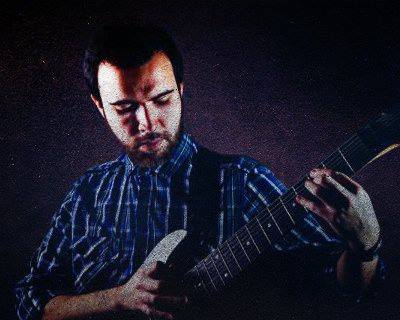 On a quiet bank holiday Monday, London city breathed a sigh of relief as the threatened tube strike was cancelled at short notice. This enabled more than a few people to pop down to King's Cross to check out three bands who are pushing progressive and technical metal boundaries in intriguing directions. In a small room called Surya, ears soon began to ring...

First up, Leeds ‘with a bit of London’ neophytes Hieroglyph hopped onto the stage to give us a taste of their fresh material. Starting out with the A-side 'Parasitus' of their recently-released two-track, the instrumental section took the audience on a trip of heavy grooves and technical melodies, ticking all the right boxes on tight musicianship, memorable songwriting (‘Dubious Disc’ and ‘Weyland Yutani’ particularly tickled the fancies) and of course hair flailing everywhere. Sam Butterfield and Jamie Rutherford had every guitar melody under control, leaving bassist Helen Tytherleigh and drummer Bradie Nixon to smash out the rhythm section underneath it, also literally when one drumstick broke during the set.

Onstage wisecracks were also order of the day, mostly from the baseball cap-sporting Mark Howes. He had quite the knack for saying just the right one-liner before a track kicked in (my favorite was “this intro is another 20 minutes, so just talk amongst yourselves") between bellowing his lungs out fervidly. His vocal counterpart, Valentina Reptile, was the beauty to his beastly vocals, her clean tone soaring over the music, and some impressive high notes to boot. The band rounded out on the promising-sounding 'Tenebris', which packed a punch and left an unspoken question of when more material will surface. There’s a lot of promising stuff coming from Hieroglyph, so tech-heads should keep them on their radar.

Next it was the friendly proggy Irish lads from Shattered Skies, whom we interviewed recently, to display their exceedingly catchy blend of proggy and poppy groove metal. Things started out well with '15 Minutes' and other new favorites getting an airing, Sean Murphy’s vocals being on pinnacle form throughout. Ian Rockett’s guitar work was also a joy to watch as he tapped and riffed his way through, as was recently-recruited Jim Hughes who did a superb job on the technical bass work. 'As The Sea Divides' also went down a treat, with its headnodding chorus and piano flourishes.

Unfortunately, not everything went in the band’s favor; the laptop sat by drummer Ross McMahon decided to conk out during the intro of older number 'Attrition', which required a lot of fiddling around until that was eventually resolved. Unperturbed by this run of bad luck, the band pressed on to unveil some more of the material from upcoming début The World We Used To Know, including one left-of-field power-ballad that matched well with Sean’s penetrating gaze. As Ian remarked in the interview, this album has been a long time coming, and it will be interesting to see how the tracks evolved from their album form to the stage.

If anyone has a shadow of a doubt that instrumental metal can’t be utterly captivating onstage, they simply need to watch Chimp Spanner perform. As he took to the stage with his live band to whoops of applause, the air began to shimmer with the combination of heat and the intensity of the rhythms that emerged from the speakers. Jim Hughes, back onstage pulling double duty as live guitarist, was the almost-sane backbone that kept the other musicians from flying off the rails. Behind the drumkit, Boris Le Gal kept a concentrated grin as he crashed through each track, from the relentless thumps of 'Bad Code' to the flowing 'Supererogation', almost as much of a showman as the frontman himself.

As for this frontman, the Chimp himself was in superb form. Paul Ortiz admitted outside before going on that he felt ‘out of practice’, but the entire time he seemed in complete control of his jaw-dropping guitar skills. There was barely a dip in intensity, even when switching guitars to play new track 'Aura', and it was nigh on impossible not to nod along to the grooves. As the crowd eked one more track from the trio (bassist Adam Swan was absent), there was a palpable sense of satiation from both crowd and band, and, at least from these ears, a desire to experience this again real soon. A top quality end to a fantastic evening.

Many thanks to the bands and Nick Azinas from Peek From The Pit for the opportunity.