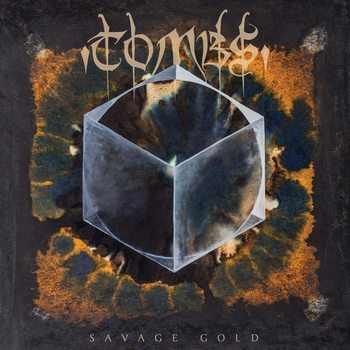 Out on June 10th through

In a revealing interview with Pitchfork’s Brandon Stosuy, Tombs' guitarist Mike Hill reveals the concept behind their new album’s title, Savage Gold. Beyond alchemy and savagery, Hill says that the album’s title reflects how, “My whole life has been about changing phases and going from a piece of raw material to something refined and better than what it once was.”

The concept of this progression through life is a near-perfect allegory for Tombs’ progression as a band, as well as Savage Gold itself. However, my one redaction is that Tombs have not necessarily been progressing from base metals to rare metals, rather that they have been transforming from something amazing to something truly incredible.

From the bands first EP in 2007, Tombs have been more and more precise with their honing of a specific type of sound, one completely their own. The genre tags of “post metal” and “progressive metal” don’t really apply, because Tombs manage to sound wholly like themselves. The sheer ferocity of the music itself is really all thats needed upon first listen.

On Savage Gold, Tombs have stripped down and rebuilt the intensity of their sound with producer Erik Rutan. The sound on the record is even more raw than on previous Tombs records, with meaty, abrasive guitars and and heavy drums. The vocals, another one of Tombs’ strong suits, are even more varied on Savage Gold, and complete the picture painted by the guitars, drums and bass. Hill opts for spoken word on a few tracks, something explored less heavily on previous albums. It works on Savage Gold, and significantly adds to the chaos and character of the album.

On the track 'Deathtripper', Hill’s foreboding monotone drawls over chugging guitars as he muses over the dark enchantment and finality of suicide. The track heavily lulls into a nightmarish trance, giving way to massive, fiery apex. Hypnotic guitars chug over and over while Hill chants “…and suicide.” It is the type of malicious, complex songwriting that Tombs executes so incredibly well.

'Deathtripper' gives way to 'Edge of Darkness', a charging track with an intro reminiscent of classic Metallica. But on an album filled to the brim with standout tracks, it is difficult to dissect each and every one. All ten songs are individual portals into the infinite fields of mind, with a strong underlying sense of psychedelia. Tombs go fully into psychedelic metal on 'Severed Lives', a sparse track that paints a harrowing picture of a post-apocalyptic world.

Tombs’ sound feels like a conjuration of something deeply dark and human, like the spontaneous generation of maggots from flesh. The band has explored cerebral ideas of human nature in the past, but Savage Gold is their most focused exploration of these concepts to date. There isn’t much left to be desired after the album closes. Tombs appears to have thrown their every ace-in-the-hole into Savage Gold, and the end product is massive and immersive.