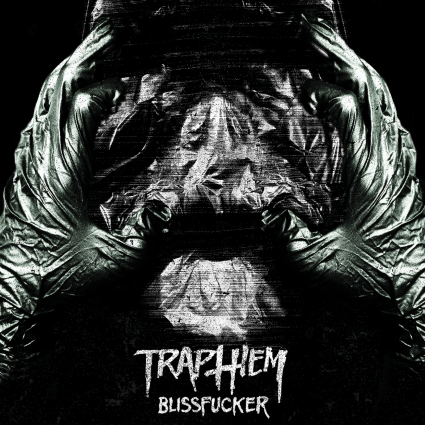 Out on June 10th through

If I were to sit down and list all the things that pissed me off in this world, this review would be much longer than roughly 500 words. However, for all intents and purposes, let’s just say this: no matter how many things piss me off in this life, I doubt that they come even close to amounting to how pissed off Trap Them sound on their new record, Blissfucker. I mean, come on. Look at that album title. Not only is it very fucking rad, the title is also a pretty damn good descriptor of an album that feeds on hatred and bitterness.

For Trap Them’s fourth release, and second on Prosthetic Records, the band cranks the noise level even higher. Kurt Ballou returns to the production decks on Blissfucker, and the results are as successful as always. Ballou has a history of bringing out the best in the bands without getting in the way of their unique sound, but there is an element to Trap Them’s new album that is unmistakably similar to Ballou’s legendary band Converge. The raw, grinding emotion of Converge is present on Blissfucker, but in the form of a visceral hate and disgust that Trap Them channel so well.

This is best evidenced by the track ‘Savage Climbers’. After the boisterous first three quarters of Blissfucker, the sluggish, vile riff on ‘Savage Climbers’ sidles in. Over the seven and a half minute length of the song, Trap Them dig their hands fully into the filth. It is reminiscent of Converge’s ‘Worms Will Feed’, but with a stronger sense of anger and d-beat underpinnings.

Not to get ahead of myself, but the last portion of the album, beginning with ‘Savage Climbers’, finds Trap Them fully embracing slower progressions blended with their crust infused hardcore sound. For my money, this change in pace is more than welcome. Trap Them is a band that has ugliness running in its veins, and the slower, creeping tracks are extremely befitting of the band. ‘Ransom Risen’, the second to last track, fantastically melds slow moving sections with blind-siding bursts of savage walls of sound.

Most of the album, however, is occupied by Trap Them’s teeth grinding, raw grindcore and hardcore punk. ‘Forming Lining Wide The Walls’ finds the band pressing the limits of even their own extremism as newly appointed drummer Brad Fickeisen seamlessly swaps between d-beat progressions and black metal blast beats. It evidences the underlying complexity that makes Trap Them work so well- high talent and proficiency fueled by anger and bitterness.

Since this entire review has been without any sense of chronology, I’ll bring up the first track to close it out. ‘Salted Crypts’ is a sludgefest, and a perfect introduction to Blissfucker. It sets the stage for the misanthropy that is to follow, and catches the listener up to speed on where Trap Them is coming from on Blissfucker. For a band as consistent as Trap Them, it’s only a matter of keeping up as they repeatedly release album upon album of gloriously hateful music.