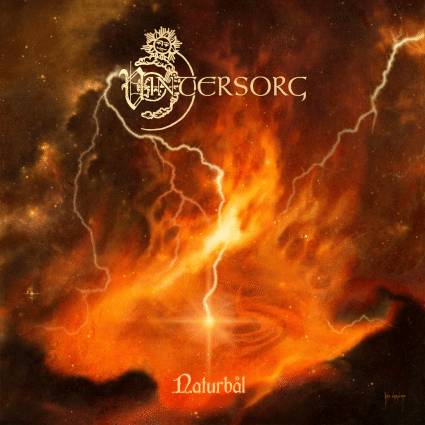 Out on June 27th through

Naturbål ("Nature's Bonfire") is the ninth studio album by long standing Swedish folk metal band Vintersorg. The band consists of musicians Andreas "Vintersorg" Hedlund or Mr. V (as some people like to call him) and guitarist Mattias Marklund. Mr. V has some serious history within the scene and has been making music for the best part of 20 years. The man has fronted some massive bands including the mighty Borknagar. He is definitely a most prolific and imaginative songwriter. At times he can be quite avant-garde; thoughts of his Cosmic Genesis album inspired by the works of Carl Sagan come to mind.

Naturbål is the third instalment of his elements series and this time he tackles one of nature’s most powerful forces 'Fire'. The album is sung entirely in Swedish, so I am unable to comment on lyrical content. However if the liner notes are anything to go by, this is a passionate look at fire in the natural world, where destruction and rebirth go hand in hand to complete the world we live in - respect is demanded.

Naturbål mixes many elements of his career to masterful effect. The first track 'Ur aska och sot coem' comes prancing its way forward with a full on electric folk riff, then bursts into brutal black metal noise. Complete with the furious growling/screaming; which is the perfect accompaniment to the extreme sound. Mr. V then brings his clean vocal to the mix to introduce his natural song writing ability. This brings an almost pop ethic to the proceedings with catchy melodies and emotional weight but still incorporating the metal sound with a recurring folk theme. To top things off, a female vocal comes from out of nowhere to give a touch style to the track.

Överallt och ingenstans' begins with a well constructed driving acoustic folk riff, including a melodic synth, to prepare us for another round of anthemic power metal. It has to be said that Mr. V likes an intro. 'En blixt från klar himmel' begins with the sound of a tree being struck by lightning.

'Natten visste vad skymningen såg' begins with an awesome drum fill leading into a melodic galloping rhythm complete with screeching guitar solo. At this point the album starts to gain momentum. This track has excellent raw vocals with an underlying unnerving synth sound that sounds like a sinister backing choir.  As for 'Elddraken' this has the classic piano driven black metal sound as well as some quality folk metal break downs.

The standout track of the album must be 'Urdarmåne'. As soon it starts it has epic written all over it. A slow but melodic riff creeps into moody piano then leading to a vocal melody that is strangely reminiscent of The Mars Volta; swiftly moving into more aggressive sharp riffs and vocals. The album ends with 'Själ i flamma', which is a passionate sing along with a hooky chorus.

It has to be said that this album falls short with its programmed drum sound. It is suited perfectly to the heavier parts of the music, but in the sparser softer parts is does sound a little weak. It also has to be said the Mr. V clean vocal can be a little too pop in parts, straying into the wrong side of fist clenching!

However, overall Naturbål has a lot going for it. There is so much happening that it will surely excite the avid folk metal fan and maybe even inspire others to listen to this very unique and diverse style of metal.