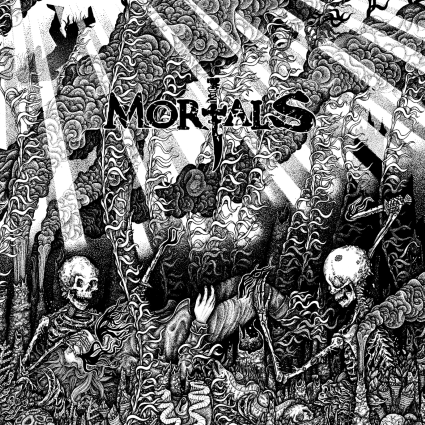 The power of the three-piece is something that is so time-tested and yet so supremely satisfying when done well. It's not a new concept, especially not in metal where it is especially common. The risk being run in not padding out your lineup is, of course, sounding thin or possibly not being able to explore a broad enough sound to keep an audience's attention. Mortals sidestep these worries completely with their debut Cursed to See the Future as it signals the debut of a seasoned, confident three-piece that embody what will always be satisfying about stripping down heavy music to its most bare essentials.

The sure-footed snarl of this album is built on the pedigree of a reasonably long run of independently-released EPs and demos. Since 2009, Mortals has been fine-tuning their attack on a cross-pollinated strain of deeply-blackened sludge. Cursed to See the Future is the band's official debut on powerhouse label Relapse Records, and it fits alongside several of that roster's seasoned artists' output. This can largely be attributed to the band's history together. They clearly sound like a band that has been preparing for this moment for a long time and it pays off for them as well as the listener.

The music here crystallizes the promise of the band's early work in a way that steps around some of the complications of a band finding its sound in a wider public eye. Similar to Kylesa's stylistic transformation, which has taken place out in the open, the music Mortals presents here sounds like an arrival at something special. The track 'Epochryphal Doom' exemplifies the band's strengths of constructing sprawling pieces that veer from the stately stomp of its opening chords, anchored by Lesley Wolf's bass lines that are given ample space to rumble and pierce accordingly. The bass plays perfectly to the guitar work of Elizabeth Cline as the two dart in and out of monolithic sludge stomps and the chiming open chords of misty-grave black metal grandeur. All the while, Caryn Havlik leads the band on the drums through every twist and turn. Wolf's vocals further lend the music a black heart with her emotive, gravelly howls. The track pummels its way through its almost 9 minute run time, with no second left to simply fill space.

And that is the true power of these songs. Just as the band itself is stripped down to essential personnel only, the music is lean and fierce. You simply do not consider the length of the tracks as they are brimming over with muscular, innovative passages that lock together like a Roman phalanx. Even at their most blistering, such as the stunning 'Series of Decay', the music does not cause fatigue or endanger itself with the sorts of tropes that might otherwise leave you tracking the seconds on your laptop. This music almost demands a different sort of listening experience, or rather and older one. It is melodically rich while also delivering its massively heavy payload. It is ideal to listen to it without distraction in order to really explore its many well-crafted corners.

Every moment on this album showcases a level of tireless craftsmanship that many bands struggle to reach throughout entire careers. As far as introductions go, and this album will likely act as one to most listeners, this one is completely staggering. It does not arrive at the gates so much as it blasts them off their hinges.