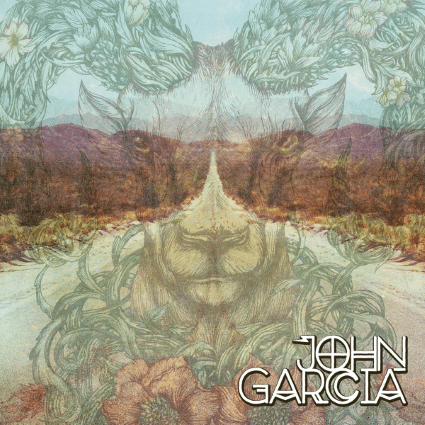 One would be forgiven for thinking that John Garcia has been going through a midlife crisis of sorts recently. Starting back in 2010 with the Garcia plays Kyuss tour (which did exactly what it said on the tin), Garcia’s apparent desire to recapture his youth through revisiting songs recorded twenty years prior by his former stoner rock-pioneering outfit quickly resulted in an (almost) reformation of said band under the moniker of Kyuss Lives!. That is, until Josh ‘Party Pooper’ Homme spat out his dummy and tried to ruin everyone’s fun.

After going to court and being told that they should all learn to get along and play together nicely, Kyuss Lives! decided to rename themselves Vista Chino, and released last year’s Peace. The album was, unsurprisingly, a Kyuss record in all-but-name-and-Homme, which was certainly no bad thing, but failed to live up to the hefty expectations placed upon it. Fast forward to the present, and Garcia’s now decided that, in lieu of buying himself a fast car or working on his six-pack, he’ll finally get around to releasing the debut solo album that he’s been teasing us with for nigh on six years.

John Garcia is a compilation of sorts, and given that it collects tracks conceived years apart, and featuring across them a wealth of musicians (including Nick Oliveri, Danko Jones, and Dwarves’ Tom Brayton and Mark Diamond), the album as a whole manages to sound impressively cohesive. It’s fair to say that, with a few notable exceptions, the majority of lead singers don’t tend to stray too far from the path when it comes to solo efforts. Here, Garcia does little to buck this trend, but let’s be honest, was anyone expecting anything other than a big chunk of scorching desert rock? While his vocal abilities may never have demonstrated the range or versatility of some of his contemporaries (see: Chris Cornell), no one can deny that Garcia is a master at what he does; his gravelly, rasping wail makes for the perfect accompaniment to the groove-laden style of stoner fuzziness that he helped pioneer. (Incidentally, it also works surprisingly well over guitar-assisted electronica, as proved by his guest appearance on The Crystal Method’s ‘Born Too Slow’, which features my all-time favourite Garcia vocal performance.)

The album wastes no time in kicking in with the fantastic ‘My Mind’; Garcia’s immediately powerful vocals thunder over winding guitar lines, while the song’s middle eight features a truly outstanding bass performance. Subduing the first half of the final chorus is a masterstroke, as Garcia menacingly groans “What the hell are you sayin’?/Who in the hell are you talkin’ to?/Won’t you leave me alone”, before the track’s finale kicks back in in monstrous fashion. As arguably the strongest song on the entire album, it makes for a stomping introduction, and despite Garcia’s request, there was no way that I was leaving him alone after this.

A cover of Black Mastiff’s ‘Rolling Stoned’ is next up, which appropriately provides us with some good ol’ fashioned stoner rock riffing, and sees Garcia successfully attempt a brief, almost Robert Plant-esque vocal melody quite dissimilar to his usual efforts, which makes for interesting listening. After all, where better to experiment with going off-piste than on a solo outing? However, given the minimal use of vocals in the largely instrumental original, the song seems like a strange cover choice for a man whose primary instrument is his windpipe. ‘Flower’, meanwhile, is a more straightforward, sludgy rocker that finds Garcia back in his comfort zone. It’s also home to the first appearance of his recently-favoured infamous vocal effect, which does at times makes it sound a bit like he’s singing to you down the phone. While this largely unnecessary distortion was overused on Peace, it’s good to see (or rather, hear) that Garcia deploys the effect slightly more sparingly overall this time around.

That being said, Garcia’s telephone voice makes an immediate return on ‘The Blvd’. A less beefy, more chilled-out approach is taken here, and the usual fuzz makes itself heard later rather than sooner. While it’s commendable that Garcia hasn’t gravitated towards the typical campfire song approach that an unforgivable amount of solo albums are guilty of, I must make a blasphemous admission that I actually wouldn’t have minded had he made this one distortion-free and stripped it right back to just the acoustic guitar that you can hear twiddling around in the background through your right earphone. (Before you start shouting at your screen, I do appreciate that blaming a John Garcia composition for having too much fuzz is like blaming a chocolate cake for being made of chocolate. And cake.)

‘5000 Miles’ is an enjoyable-if-slightly-typical slab of stoner rock that could easily have fallen off the back of the Vista Chino tour bus, and contains some nice jangly guitar work that at times sounds as though someone sneaked a Big Muff onto John Frusciante’s pedalboard. In contrast, ‘Confusion’ is an almost complete departure. Carefully balanced upon feedback-drenched guitar and a minimal, delicate use of drums, an arrangement such as this could run the risk of simply sounding unfinished, but thanks to the carefully considered tracklisting, it instead acts as the perfect half-time breather before you’re thrown back into the ring for side B.

A track to get lost within, ‘His Bullets Energy’ takes your hand and welcomes you to the second half of the album, enveloping you with hypnotic, repetitive guitar underpinned by more impressive bass fretplay that take time to build and pull you into their trance during the verse before bursting into a huge, glorious chorus. ‘Argleben’ (yep, not a typo), less mesmerising and more direct, sees Garcia’s vocals roar above a barrage of distortion which grinds to an ever-slowing conclusion, allowing the grooving ‘Saddleback’ to kick-start the tempo. Closely followed by the driving desperation of ‘All These Walls’, it’s a shrewdly clever way to keep the listener on their toes and stop them from wandering off to forage for munchies as they near the album’s conclusion.

Featuring Robby Krieger of The Doors fame, ‘Her Bullets Energy’ is built upon layers of the most outstanding guitar playing on display on John Garcia, and serves as a truly beautiful end to the album, as well as satisfying my earlier request for a truly stripped-back campfire number, albeit with an almost flamenco guitar twist. The track is reminiscent of the way ‘Mosquito Song’ closes Queens Of The Stone Age’s magnum opus, Songs For The Deaf (although don’t tell John that I said that), with Garcia’s vulnerable, heart-wrenching melodies shining through until the album’s last breath.

Going into the future, John Garcia won’t be hailed as being as influential as any Kyuss album before it, but that hardly matters. While it will still undoubtedly satisfy any fans of Kyuss or early QOTSA far more so than any of Josh Homme’s recent efforts will, Garcia puts enough of his own personal twist on this album to give it its own distinct flavour. Granted, the majority of the material on display here is neither particularly surprising nor revolutionary, but this mass of deftly-executed stoner rock does more than enough to differentiate itself from Garcia’s past records. If Vista Chino’s Peace was Garcia attempting to recapture his youth, then John Garcia only serves to prove how much he has grown as a songwriter since those hazy desert days two decades ago.