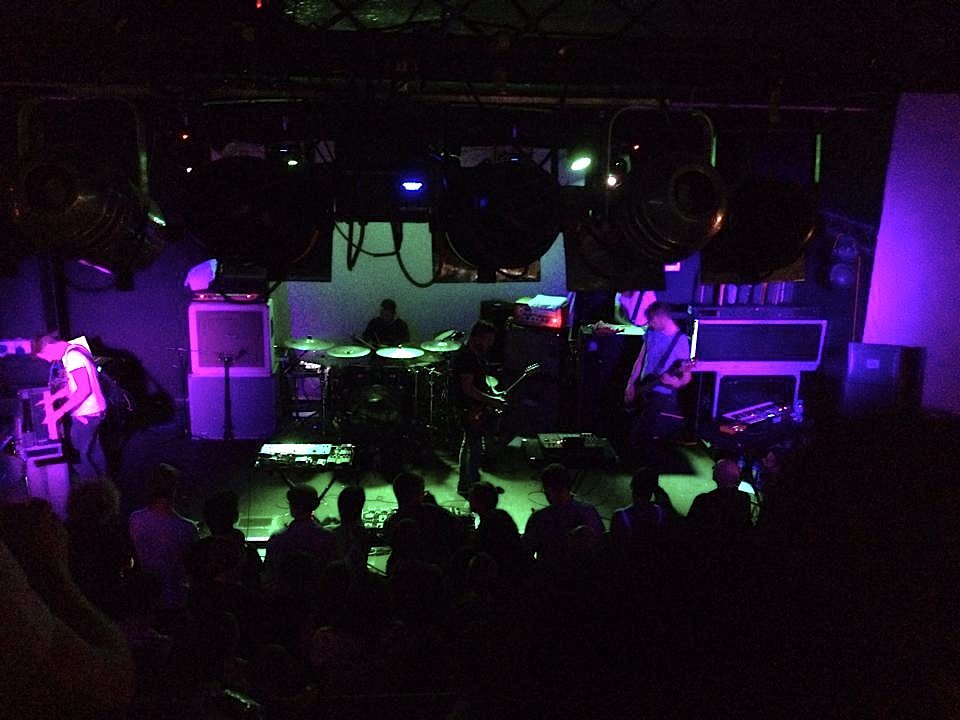 Did you ever hear of a little gathering on the West coast of Wales, in the tiny town of Borth, called Square Festival?  No?  Didn't think so.  Unfortunately, 2009 - the very year that I attended this festival - was the third and final year that it took place.  This was also the year that 65daysofstatic headlined the main stage of  the festival, and the first time I saw the young group of instrumental maniacs pounding their drums and guitars as hard as physically possible whilst dancing about the stage.  My eighteen year old self was utterly blown away.

Five years on, and perhaps a little more educated and (hopefully) mature, I eagerly awaited seeing 65daysofstatic for a second time.  I was pleasantly surprised to find that they were playing at The Globe - one of Cardiff's hidden gems in terms of it's quality as a venue, but sadly at which decent concerts rarely happen.

The past few weeks have been lovely weather-wise.  Wales' population who are so used to endless dull cloud and rain - who are we to complain when the sun is out?  I hate to take an English approach about the weather, but by golly it was unbearably hot that Monday evening.  This was something that The Globe seemed inept to deal with.  The room, although not at all small, was the hottest room I have ever entered.  Sweating from places I didn't know you could sweat from, I found my way to the front of the crowd, desperate for water and in a bit of a grump.

Suddenly, all my worries about passing out from the heat evaporated as the lights went out and feathery figures took to the stage.  Although I have attended several festivals that Nordic Giants have played, this was the first time I had managed to catch the two piece.  God I wish I had seen them sooner. 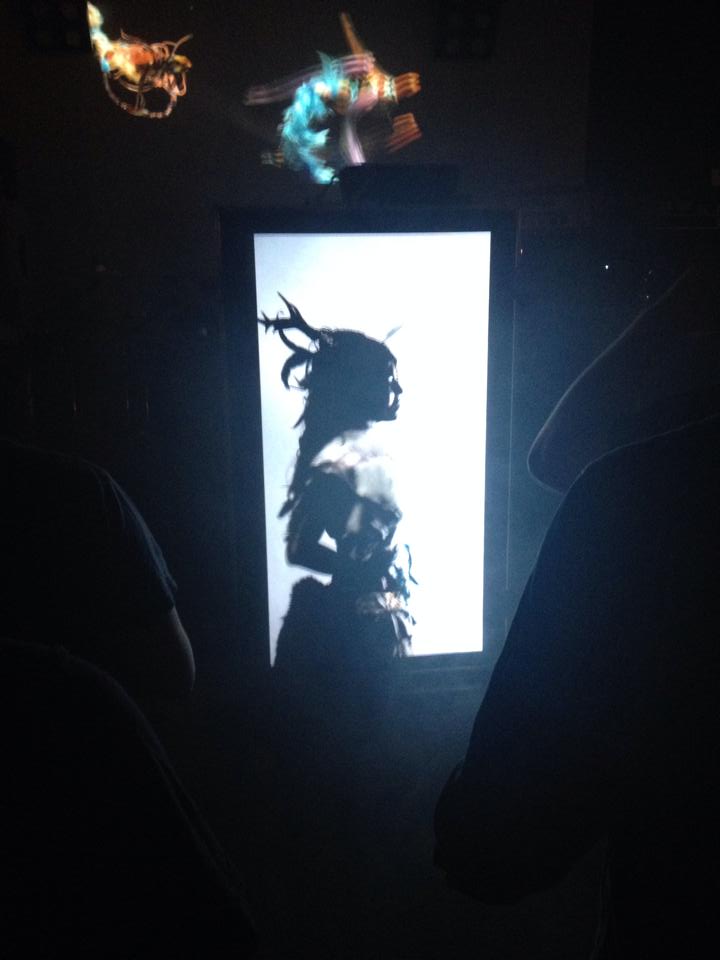 Sat facing one another at opposite ends of the stage, Loki and Roka Skuld (as their bio names them) played a mixture of drums, keyboards, sound pads, guitars and trumpets.  Their sound is a huge blend of genres and influences that I could feebly attempt at locating all day long.  In short, a cinematic postrock finds math and jazz injections, whilst always retaining a dark, thunderous and ultimately enormous canvas of rich textures, dynamics and sounds.  Theirs is a sound that amongst the endless list of today's postrock acts is truly unique and enveloping, never ceasing to burn with emotion.

Not only is their music gorgeous, but their live show is simply astonishing.  They were accompanied by projections, both front-centre stage and on the rear backdrop.  The images at the front of the stage were placed on a rectangular box, about 0.5m x 1m.  The backdrop projections were altogether larger and more standard in their shape and form.  What's more, the films projected on these two canvases were slightly different - often similar in theme but with slight variations in position or detail.  The films, created by someone (or potentially a whole team?) who is extremely talented, varied from abstract wisps of smoke to families running around in full blown scuba diving equipment.  During these wonderfully engulfing clips, there was a regular return to visuals that incapsulate the band's native American influences. 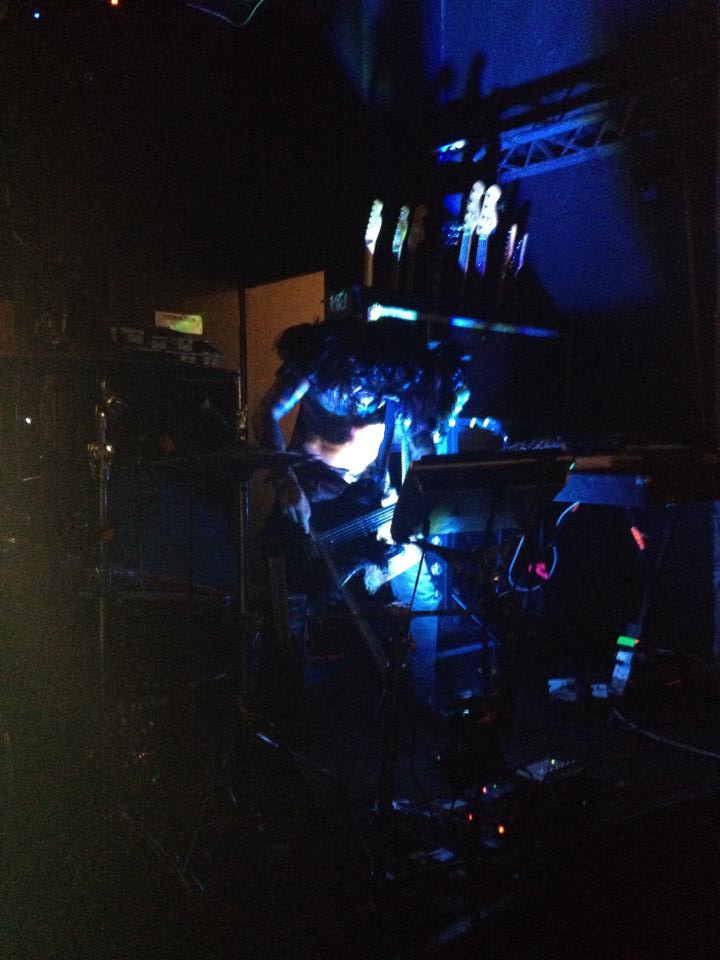 Nordic Giants don't just go all out in their sound and visuals;  their attire is a marvel in itself.   Enormous feathered headpieces, tribal body paint smeared all over, rags that appear filthy and hair pretty much everywhere.  The band also utilised their own light show, discarding The Globe's enormous rig.  Instead, two lights were positioned at the foot of both members, facing upwards so as to darken the eyes and lengthen the shadows.  As the two men aggressively assaulted their instruments like two possessed demons, smoke spewed from the machines, creating a misty vail that enveloped the room.

As a result, every single sense in the human body was successfully triggered by the band's performance.  I have already tried tirelessly to describe the experience of seeing this incredible act to several friends.  Alas, words cannot do Nordic Giants justice.  Their bio on their website perhaps comes close, suggesting that their live shows are like a 'religious experience'.  I am by no means religious.  But if you were to have one of those outer-body, my-small-life-and-worries-are-miniscule-and-insignificant-and-I-am-living-only-in-this-wonderful-wonderful-moment type of revelations, then it may be roused by the simply perfect Nordic Giants.

The crowd, in their transfixed state, started to come to their senses just after the two piece had left the stage, with a rather laboured applause at first.  On coming back down to earth and with a realisation at the immense spectacle they had just witnessed, howls and roars of approval were offered up as appreciation to the astonishing performance.  Everyone slowly departed outside, still semi-mesmerised, to gain respite from the sweltering heat.

During the interval there was some strange, poppy/emo crap playing over the speakers.  I had not a care for what it was, just that it would stop as soon as possible.  At the bar, I turned to my companion and suggested that Nordic Giants were so flipping fantastic I would hate to be the band following them.  Perhaps it was my excitement at seeing them for the first time.  Or perhaps I was still lost, dreaming and captivated - swallowed up and altogether enchanted.  In any case, I watched attentively as 65daysofstatic took to the stage in front of a very receptive crowd. 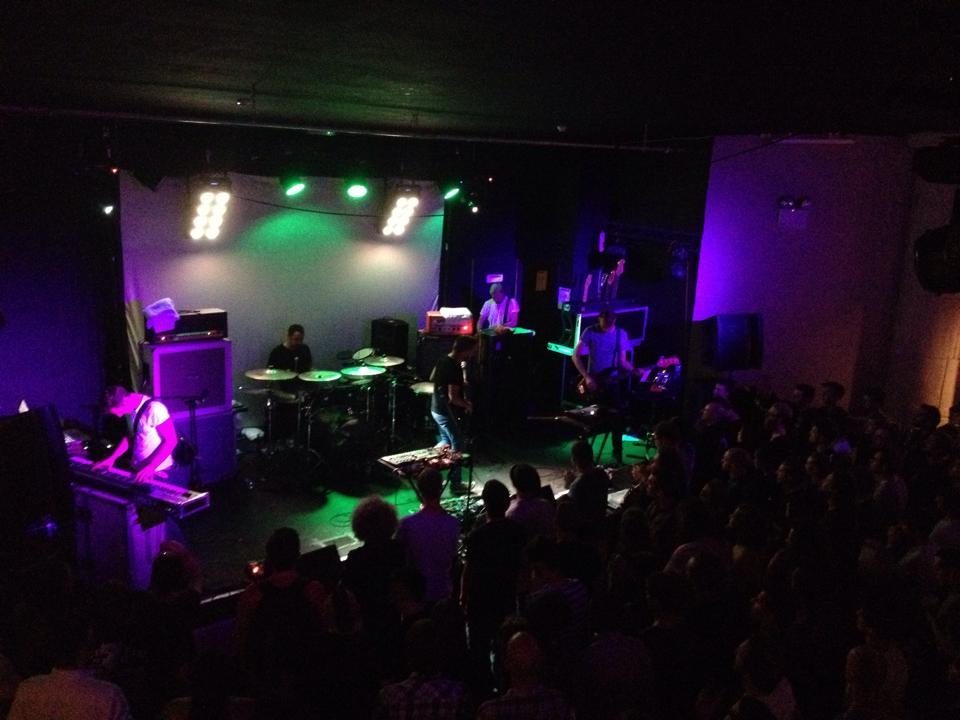 They opened with the first track from their latest album Wild Light, which is called 'Heat Death Infinity Splitter'.  A standard 65days sound bed was laid down, glitchy and barely tonal, whilst a sample read 'No one knows what is happening.  There is a lot of danger out there, OK?'  All of a sudden a fuzzy synth took the lead, and brought with it synthesised drums and typical walls of distortion.  It is a slow burner, and one that although you might not associate it with the start of a set, works remarkably well as a opener.  It also set the mood for the band's latest material, with the synthesisers taking the limelight.

From the off, the band played with balls and gusto.  The drummer stood up, thwacking seven shades of shit into anything within his reach.  The unnecessarily huge amps were made to squeal, and every single key on the synths is rammed.  There was jumping, dancing, whirling and grinning.  The band certainly seemed to be having a whole lot of fun, and so did the audience. 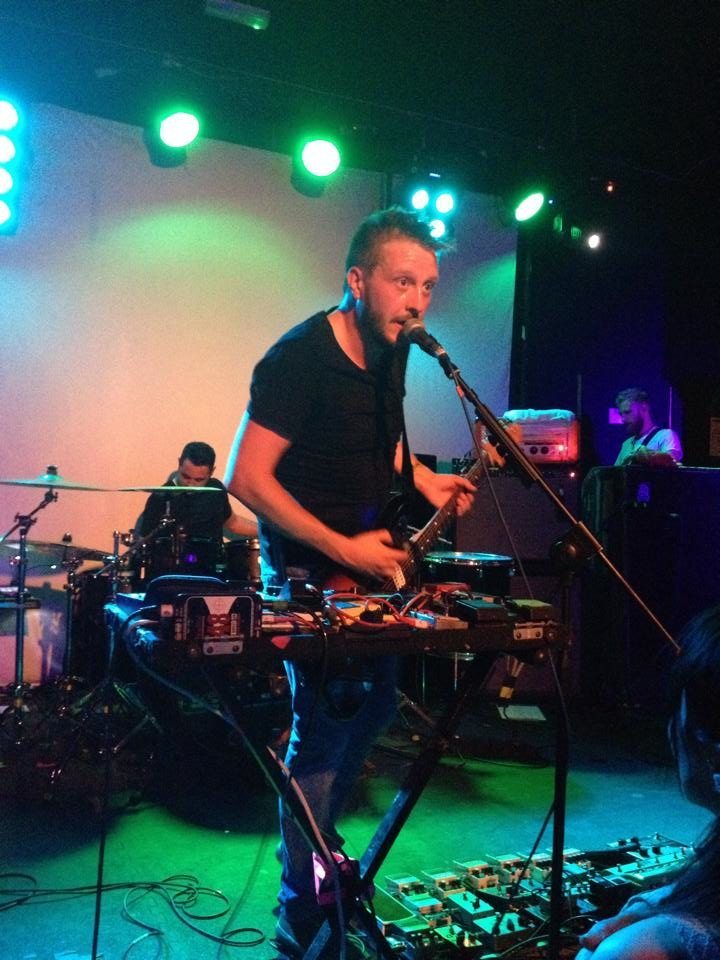 'Taipei' was the highlight of the set for me.  The use of a lone shaker by the drummer allowed the texture to be almost none existent - a nice change from the constant and relentless synths.  Beautifully clean piano chords were brought in before the drums decided to bounce about.  The guitar part was sparse, with only one or two notes emphasising the piano.  After a build, a climax, and a relapse into the thick textures of those synths, the song subsides.  But there is no boring or repetitive nature about the song - it is altogether tingly and has this innate swaying feel.

There were also a few oldies thrown into the set.  One guy stood behind me was absolutely dying for 'Radio Protector'.  Before every song started, he was certain that 'this is it, this is it!' and was thoroughly disappointed when it wasn't.  Hmmmm.  He finally got his wish about an hour into the band's performance.  I've got to give them credit - although they must have played 'Radio Protector' a million times, they still gave it all they had and seemed to enjoy playing it just as much as their newer material.  It was also quite nice to be transported into the past when my younger self was obsessed with 'One Time For All Time'.

Despite the fact that I have enjoyed practically every 65daysofstatic release and have always heard good things about their live shows, I was altogether underwhelmed.  That said, their performance was flawless and fun.  It is certainly evident that they put their hearts and souls into their music and live shows.  Again, maybe I was unable to take any more astonishment after absolutely loving Nordic Giants.  This should not detract from what was a brilliant performance put in by 65daysofstatic.  But somehow, it just did.