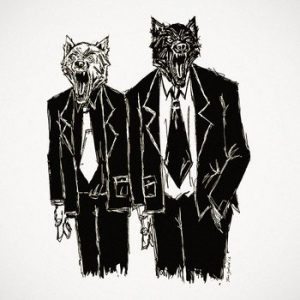 The album violently bursts into life with a warped two note riff and a scream, a second later the drums stumble in.

Doing it Right and Doing it Well is a short-lived burst of dark, acrimonious noise that doesn’t let up once throughout its running length. Relying only on drums, vocals, and a 3 string hybrid bass/guitar the two piece merge noisy blues riffs with math rock rhythms to produce a wholly distinct sound; landing sonically somewhere between The Jesus Lizard and Bitch Magnet.

Despite being short, the tracks are subject to constant shifts and almost every song has evolved into something entirely new by the time it’s over. Biscuit Mouth manage this sense of a constant buildup without losing any of the minimalism that makes them so fervent and enjoyable. Their approach of schizophrenically veering from atmospheric dark sections to fast paced, almost danceable segments works fantastically well, and the shrieking, indecipherable vocals cut through everything and glue the album together.

The highlight of the album comes from the recently released single, ‘Roll Into The Dancer’. The song staggers its way through the first minute and a half, following this churning riff as long as it can before collapsing completely. It reemerges as a surprisingly dancey, catchy track and it’s the perfect mix of everything Doing it Right and Doing it Well is about; it’s messy, turbulent, and surprisingly fun.

Cut Loose and Then Some is another album highlight. Building slowly over four minutes to a violent crescendo and then slipping away into the piercing final track. It’s perfectly paced and guarantees that the album ends on a high.

The few weaker points on the album stem from the longer songs, feeling very similar to the shorter songs, tracks like ‘Yaw’ seem to drag on for just a little too long before bursting into life. ‘You Want Something?’ is a much stronger track. It serves to fill out the darker side of the album but again it doesn’t find a way to quite justify its five and a half minute running length.

These criticisms are minor for an album that gets it so right consistently, and for such a new and unheard of band Biscuit Mouth have managed to create a stunningly accomplished album.