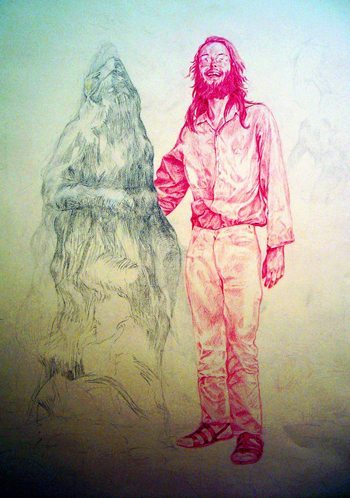 Embrace the Noisenik! Bronto Skylift return this September with a finger bleeding, earth shattering, hold onto your nuts follow up. It kind of puts things into perspective when you listen to 2 guys make such a loud yet unproblematic combination of tracks that you can go back to over and over, not to mention that I have it on good authority that these guys can do on stage exactly if not more than what your about to listen to!

Date With A Ghoul opens with a riff so catchy and perfectly placed 'Bird Catcher/Eater' that it has an instantaneous hook on your ears. To have a deal breaker so early on in an album is a fine accomplishment. They're not trying to throw anything world changing at you, they're keeping it real with affective melodies and drums, making Death Above 1975 look like a couple of lonely Trafalgar Square pigeons. 'Highland' maintains a relentlessness and introduces a real waring and abrasive signature combination from drums and guitar.

The whole feel to this album has a real definitive flow to it. Roughly spanning 28 minutes it is one of the shorter albums I’ve listened to recently, but this is in no way a bad thing. Kudos to the guys for understanding the balance of music which is a quality that not every band/musician can acknowledge and put into practice these days.

For me, the strongest of tracks on the album is 'Stormer'. It's the right place at the right time for the clarity of the beat and the drive you feel from the vocals and melody. It's a strong and forceful track, produced immaculately too. What I wouldn’t give to hear this song performed live when it gives you goose bumps from the recording.

Mid album, and you have to keep pinching yourself to remind you your still listening to just 2 guys here. ’Shark’ has a real danger element feel to it. Combining a chugging riff and bass drum with again more noise. It becomes a shame to use the word noise as it almost feels an injustice, but if you know Bronto Skylift already, you know that’s not a negative word.

This album is a great place to start if your looking to go down the dirty and loud avenue, but it also caters for the hardcore fans too, especially the second half of the album. ‘Shit Hoody’ and ‘Best Finishing Move Ever’ are the darker of the songs but maintain good solid structure to the album leaving you with an itch to hit play again and start at the top. This album has all the qualities of an exceptional release. Something fans are going to be hugely impressed with I have no doubt.