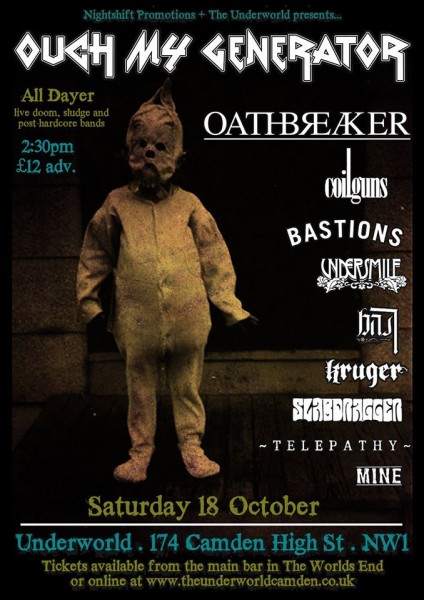 Some days I feel blessed that I live in London; this is one of those days. The fact that within 1 hour of my doorstep is a bill of nine top-notch bands, with tickets amounting to £12 (not even vaguely close to representing the quality of the lineup), quickly dispels any misgivings one can have about the horrendous transportation system or extortionate living price of this city. I knew that my afternoon and evening entertainment was sorted long before the first crashing notes hit my ears.

Ouch My Generator!, for those unfamiliar, is a series of heavy music all-dayers, encompassing post-hardcore, doom, sludge, math rock and various other noisy blends. Previously featuring names such as Witch Mountain, Necro Deathmort, Pariso and Raketkanon, the series is now in its third instalment since starting this January. Looking at the lineups, the usually cliché “there’s something for everyone” has rarely been more apt. It’s time to head down into The Underworld, armed with earplugs.

Due to logistical issues, I miss out on the hotly-tipped openers Meadows, who replace Slabdragger at last minute, although my enquiries give me the resounding impression of a triumphant set. My first taste of noise comes from Mine, who are significantly louder in the flesh than on record. Their vocalist, clad in a beanie and a Gehenna shirt, is a cathartic soul who screams his lungs out, while the guitar tone surrounds us with its warm embracing tone. The band love their dynamics, swinging between 80s emo and chilled shoegazing, with few words between songs. Each musician is intent on his craft, the guitarists in a more subdued fashion than the vocalist. Meanwhile, the shirtless drummer’s veins are popping out of his neck with the force of his playing. A quick thank you when they’re done, and they quietly leave the stage to solid applause.

Describing Telepathy‘s sound is paradoxically incredibly challenging and yet so simple, summed up in one forceful word: riffs. Huge, stomping, meaty riffs which will not rest until every head is banging. Quite how the band do it is remarkable; their stage presence is infectious, Piotr Turek in particular thumping and kicking around with his guitar cable swinging. Meanwhile Albert Turek is similarly intense in his drumming performance, playing so hard that he snaps a drumstick during one song. The blend of progressive and sludgy post-metal imprints itself on the ears, and when executed with this level of intensity leaves more than a few mouths hanging open. Easily one of the highlight sets of the night, Telepathy can walk off stage with smug grins plastered on their faces.

I only manage to catch half of the blackened mire which is Bast, but it’s a thundering half nonetheless. Deafeningly loud, the three-piece have the crowd in hand as they heave and shove through their set. Craig Bryant’s roar echoes over his doom-laden riffs, while bassist Gavin Thomas is a whirl of hair as he plows through the low end, and Jon Lee holds it all together with thumps and cymbal crashes. In the moments where the band hit a black metal stride, it’s pure devastation with howling shrieks abounding. Splendid stuff.

There is something about the European representation at Ouch My Generator! tonight which seems to add an extra level of insanity to their vocalists. First example of this is Renaud Meichtry of Kruger; the wiry and unpredictable chap has no qualms about bellowing directly in people’s faces, upending stage monitors to sit or stand on, or grabbing a beer backstage mid-set. The band’s rollicking set of sludge-n’-roll rumbles on chaotically underneath, chock full of groovy riffs and frenetic drum patterns from a well-oiled band. A couple of tracks from the recently-released Adam & Steve make an appearance, including the catchy as hell ‘The Wild Brunch’, which showcases Meichtry’s hearty singing alongside the raging screams. In a surprise and hilarious move, Meichtry ends up on the shoulders of one of the crowd members for a brief piggyback. One could say it brings him closer to the crowd (in both senses!), but it also brings a sense of heartfelt honesty to him walking around the crowd during their final song, hugging and kissing many of them on the cheek. It is with a little trepidation after such a wild set that I go to interview them afterwards.

[Said interview means I miss out on somber doomsters Undersmile and Generator favorites Bastions, but the amount of sweat and tension about the place when I return tells its own story.]

Whoever is ready for Coilguns‘ set is either lying or mad. The band play their set with reckless and animalistic abandon, embodied in vocalist Louis Jucker. If Meichtry is wiry and unpredictable, Jucker is a spindly orangutan who spends half the set launching himself from the stage at the crowd, and the other half participating in the moshpits he creates. It becomes a struggle to focus on the music, and time itself seems to warp as my friend turns to me and yells in my ear, “they’ve only played a couple of songs so far!” before dodging out of the way of a flying body. The adrenaline rush of their set is palpable, a thrill that is impossible to shake off. Onstage is surprisingly tame; one drummer and a guitarist are going at it on their respective instruments, with a massive pedal board which is occasionally fiddled with, all churning out the punishing brand of chaotic hardcore they are renowned for. For Coilguns’ second-last song, Jucker joins them onstage slinging a guitar, screaming into the microphone as he faces away from the crowd. It is the only relatively subdued moment for the whole set. To compensate for this, the finale is spectacular, involving a vocalist paraded around the floor in a tangle of microphone cord. We all need some air after that breath-taking display.

If Coilguns were the hot and sweaty hyperactive kid during the daytime, Oathbreaker are the intimidating and possessed child of the night. A pale blue light illuminates the band, not unlike moonlight in color, and vocalist Caro Tanghe stands out starkly against it. Clad in a white shift, head bowed behind a curtain of hair to rival Jonas Renkse’s, she lets loose a furious shriek that goes beyond catharsis and reaches exorcism levels. The other band members are similarly lost in their music, riding the riptide of dark, blackened hardcore through every headbang. Both albums get a fair outing, including the lengthy centerpiece of ‘As I Look Into The Abyss’/’The Abyss Looks Into Me’, featuring Tanghe’s ghostly soft singing. Although the atmosphere is somewhat spoilt in the softer moments due to several audience members talking loudly, the overall effect of the music and stage presence is stupefying. It roots fixedly to the spot anyone who isn’t chucking themselves around in the pit, and by the time Tanghe breaks her silence with the words “two songs left”, it is impossible to believe their headline set has flown by so quickly. An incredible way to end the day, and a band who cannot return to the UK soon enough.

Trudging out into the cold October air, a sea of contended faces and ringing ears take in the series of high-quality sets they’ve just witnessed. One thing is for certain: next year’s all-dayer will be marked in pen on calendars, once people have recovered from the chaos. Ouch My Generator? Ouch my everything!

Our thanks go to Nightshift Promotions for the event, and the bands for putting on such stellar sets.