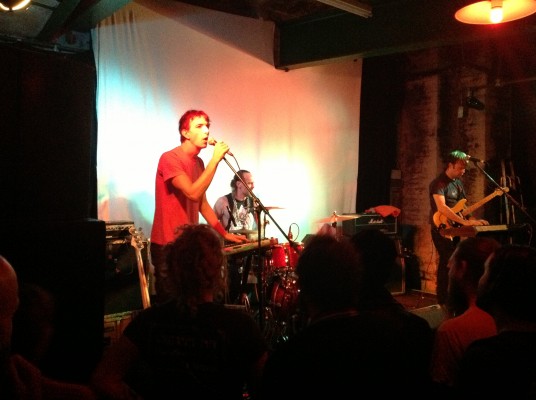 At Green Door Store in Brighton on a very wet Tuesday night for Trans Am, Gum Takes Tooth and the mighty AK/DK (I’m a big fan if theirs!). I’ve been to Green Door Store a few times, and it’s a pretty good little venue just a couple of minutes walk from Brighton station. I met up with a friend, and before I go in to the venue I saw G from AK/DK outside, and as a quick chat, before venturing in out of the rain. Inside I see an old friend John Lynch, down helping Gum Takes Tooth…a pleasant surprise! Soundchecks were being done, and so I chatted for a bit, before being informed that AK/DK were ready to start. 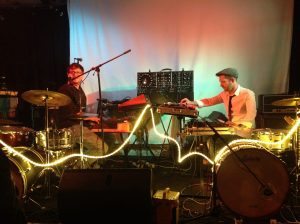 First song in for AK/DK and the Brighton based 2 piece with twin synths and twin drum kits get the heads bobbing and toes tapping with the synth onslaught, backed by the double drums. The guys feed off each other and it really is a joy to see them play! ‘Maxwell’s Waves’ is second song up, a personal favourite! Ed is the more energetic of the pair tonight, with G having suffered a recurrence of a back injury a couple of days previously. Banter is having to be kept to a minimum tonight due to limited stage time, but we get enough through the vocal effects to get us grinning. A new song closed the set – they thought they had one more but sadly were told that that was it – the new song had more synth than drums, and all too soon a short but hugely enjoyable set that left you with a big grin on your face, came to an end.

Gum Take Tooth were next on, another 2 piece with one on synth/vocals, the other on drums. I’ve seen them once before, and they didn’t do too much for me that time, but friends 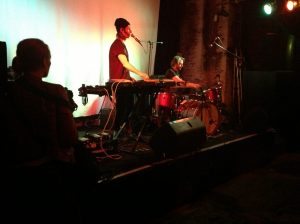 whose opinions I value like them, so I was prepared to give ’em another go. They are an experimental noise band, and get a few heads nodding and feet shuffling as they got going on their first song. Second track kicks in with an almost tribal beat, and is a bit ‘Battles’ in sound – a good thing to these ears! Great drumming and some mighty beats were a highlight of the set for me, but I really didn’t quite get the vocal sounds and keyboards, they seemed to be just noise to me as opposed to anything which resembled a hook or a tune, which is something I felt I needed to grab a hold on to.

At a now pretty full Green Door Store, Next up are Trans Am. I’ve heard of them, but never knowingly heard any of their music. They are a 3 piece with drums/synth, guitar/synth/backing vocal, and bass/synth/vocal. Sounding like a heavier Kraftwerk on the first track, complete with robotic vocal effect, the second is a John Carpenter into 70’s US cop show soundtrack – but it works! Third track was a recent one apparently, and sounded post punk. It was OK, but nothing more. The next track sounded like Silver Apples with added guitar and drums! Must have been a crowd favourite as it got a few pockets of dancing going.

The drummer seems to be off rhythm tonight. Not knowing the band I don’t know if that’s the norm or just a bad night… The next song is another noisy post punk. Done well, but nothing more than that. For the next one the drummer takes over the guitarists synth, adds a simple drum backing track…and then a simple backing melody. A couple of tasteless Dave Grohl/Foo Fighter jokes then followed, which although I’m not a particular fan, I took offence to. I’ve been going to gigs for 28 years and have no issue with jokes in between songs, but this was beyond that and the drummer clearly has an issue. It was one comment too far for me though, and I decided that I didn’t want to carry on watching a band that is comfortable in letting one of their members behave in such a way, so this particular night had come to an end for me and I walked out.