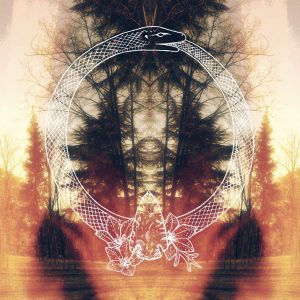 Wilderness Hymnal is the birthchild and personal project of GHR Leeming, currently based in Manchester. Multi-instrumentalist and vocalist, Leeming’s venture with Wilderness Hymnal is into the growing doom scene, both in the UK and worldwide, but Hymnal is a different animal than the others. You won’t find obvious 20bpm heavily distorted riffs and bellowed vocals (don’t get me wrong, I love that), but you will get a suffocating amount of atmosphere thanks to a mixture of keys, electronics, drones and deep Ulver-esque vocals.

Transmutation is the debut EP made up by three tracks, mounting in just under 19-minutes in length. The first track, ‘Phosphor’, opens with a mixture of chiming electronics and wavy drones, soon intermingled by clean guitar and sombre chords from a piano. Once they reach the 1.16 mark though, the piano breaks into the front and leads with a jaunty melody; Leeming then layering his bassy vocals over the top of it. The two obviously fit but it feels like there’s some sort of friction between them – almost reminiscent of the how Nordic Giants mix their post-rock sensibilities with guest dub/R’n’B vocals – but it works. The track ends with drums leading all the instrumentals out, feeling like a wholesome conclusion to the soundtrack of a lone journey across fields and forests.

Next up is ‘Arc’, which takes a much more mellow approach overall – almost Isis-like (the last few albums) with its backing electronic keys and use of echo; providing a load of textures for the listener to discover and drown themselves in. The sound of electronics that intertwine and change feels like a natural evolution of sound, and Leeming’s vocals sort of orchestrates it all. There’s also a morose section at the 3.05 onwards that recreates that haunting feeling from The Shining soundtrack (especially ‘Dies Irae’). Eventually the track steps back into the light and we get soaring vocals, reminding us of where we left off.

Lastly, we have ‘Torsion’, probably the most haunting and ambitious of all three tracks. Extremely intricate with its drones and flowing piano, along with Leeming’s use of layered chanting vocals, it sounds absolutely massive, as if you really are listening to a recording of something in a desolate church somewhere – further supported with lyrics like “And the water no longer flows / And I grow tired of damage and repair / Nailed down in one position / Watching the dust blow away”. Despite the brooding nature of the track, it’s hard not feel relaxed and comfortably immersed in it all, especially when (what seems like) the sound of thunder and rain softly melts through the background.

Eventually it all manifests itself into a dizzying clash of drums, guitar and keys, but rounds off with a lone piano, bringing the EP to a gentle end.

Transmutation, if it’s not clear at this point, is a refreshing borderless and experimental vein in music that hasn’t been punctured yet. Leeming is onto something here and this taster only brings a lot of promise for future releases, maybe even a dangerous amount where expectancies are very high, but it’s clear that Wilderness Hymnal is not a one-trick pony and has room to grow into new areas. Let’s just hope it’s not long before we find out how that goes.