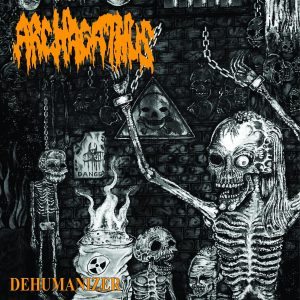 Maybe it’s the sick metallic tinge on everything or the rancid production value that brings out the true wretchedness of Dehumanizer; an altogether horrifying and ugly Golgothan that has little to less mercy and a zero tolerance on patience. Archagathus are exactly we have come to know them: filthy, fast loud, guttural, and savage.

There’s no spending time with interludes, lengthy guitar solos, melodic sections or anything the DIY punk aesthetic would deem “bullshit” that Archagathus takes to thought. Dehumanizer is an album that states its business and charges forth. With one sound sample to introduce the album and declare “I’m going to get drunk as fuck!”, Archagathus simply hit hard and steamroll ahead.

Grindcore is a genre that is mostly inaccessible for people. And for what that’s worth, Archagathus are a step in an even more stomach churning sound. What they do has been done already. However, their Insect Warfare/Squash Bowels trudge through sludgy, punked out blasts are several cuts above the rest. While a lot of bands hammer on the trashy, sewage sled of grindcore, few capture the mincecore sound this well, Agathocles aside. Tracks like ‘Violence for No Reason’ and ‘Land of Filth’ are filthy bits blasting through sewage riddled screams and heavy-as-bricks drums.

Archagathus aren’t just good at blasting and being the crud under fingernails, they have an excellent punk attitude about them. Pieces like ‘Military Punx’ are pure old school 80s hardcore punchers. Upbeat and fast paced without falling into a full throttle blast beat. It’s a refreshing switch up that helps break up songs and give other distinguishing characteristics.

As one might come to expect with all this, the album is very monotone throughout. Those that follow this genre already know this however. The grindcore/mincecore sound is better known for its punk attributes and blasting attributes than for having an incredible amount of variation. As much as that may seem like a knock against the material, I’d say it’s quite the opposite. Archagathus would sound generic to someone outside the genre’s extension but dedicated listeners know the difference. The Archagathus sound is way above par for many of their contemporaries. It never sounds like its running out of steam and always serves up something putrid.

If you haven’t had checked out Archagathus and are a grindcore fan then Dehumanizer is an album you must hear. From its old school 80s pulpy artwork to the raw, unpolished sound, it is a cut of filth that perpetually delivers. Grind freaks will love it but casual listeners will find themselves turned off by it. If you’ve been looking for something punk, rough and straight from the sewers go get Dehumanizer. This is the true raging guttural sound.