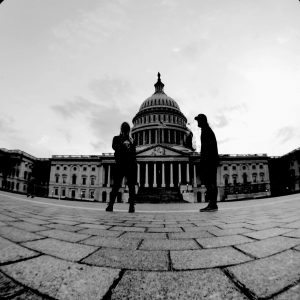 Released on December 5, 2014 via Nomadic Fortress

Jucifer are not like other bands. Arguably the world’s only married couple who tour the world all year round in an RV, towing enough weapons-grade amplification to reduce most venues to rubble. They’re definitely the only ones to have written concept double-albums about both Marie Antoinette and the history of the Volgograd. Well, at least within the genre of doom metal. Wait, grindcore. No, folk. Nah, more like ’90s alt-rock. Or shoegaze…

Their latest recording, District of Dystopia, is a short sharp blast of an album focusing on the history of the United States via the impact of legislation determined in the nation’s capital, Washington DC. It clocks in at a lean 25 minutes, and is accompanied by 31 pages of lyrics and historical notation. It will take you longer to determine the subject of most songs than it will to listen to them. However if this exhaustive approach is not for you, there’s 9 tracks of punked-up grindcore to enjoy, which is perhaps the closest Jucifer have come to representing the ear-bleeding ecstasy of their live performance.

From the lurching staccato blasts of opener ‘Non Gratum Anus Rodentum’, it’s clear that Jucifer aren’t exactly aiming for mass appeal with this recording. The distortion is so thick it almost buries the vocals, while drummer Edgar Livengood’s cymbal taps are the only thing to cut through the murk with all the claustrophobic clarity of a pneumatic drill in the dentist’s chair. The uncomfortable effect matches the subject matter perfectly, an appropriate soundtrack to the horrors of the Vietnam war.

The opening seconds of ‘It Can’t Be Helped’ demonstrate that Edgar’s collection of Dropdead shirts aren’t just because he digs the name, while ‘Narcissist’ has Amber Valentine expelling some of the rawest, raspiest vocals this side of Tom Waits.

The gnarly thrash-sludge riff that propels ‘Red Summer’ is one of the album’s highlights, and if the midsection of the track doesn’t have you stomping around like a drunken T-Rex, there’s something wrong with you. The song eventually collapses under it’s own twisted heaviness, the tempo slowing to an exhausted crawl before roaring back into life on ‘Ratified’. I could be wrong, but this one sounds like it’s Edgar on lead vocals, something which can be heard plenty throughout their live performances but not as often on record.

‘Decapitating The Regime’ is all woozy riff and martial snare, the subject matter being the reversal of the US’s initial support for Saddam Hussein’s regime over the course of both Gulf Wars; from the supply of weapons to the regime, used in multiple horrific genocidal acts over the course of two decades, to the eventual murder of thousands of Western military personnel by those same weapons. While the song may indeed be a fuckin’ ripper, duuude, delve a little deeper and you’ll see the real core of grind: Grind is protest.

The opening fuzz of ‘Justice’ sounds more akin to Grinderman than grindcore, but Amber’s rabid snarl is far more terrifying than even the darkest recesses of Cave’s mind. Closer ‘The Object Of Power’ concerns the greatest human rights violation of the 21st century, the US Patriot Act. The irony of this is that making such a song available in the public domain is likely to lead to some sort of file being opened on Jucifer as a result. The American government is far more terrifying than the usual heavy metal lyrical fodder; Satan is fictional, surveillance is not.

Closer to an old school lo-fi demo tape than a polished album, this is the sound of true DIY spirit. Recorded, mixed and mastered entirely by the band themselves in their own RV, this album did not exist 3 months ago. Signed copies are now being posted out to fans around the world from the very same RV the album was recorded in, by the two people who wrote it. Yeah, it’s a little rough around the edges, but that’s part of the appeal; this is raw, angry, political punk the way they used to make it.