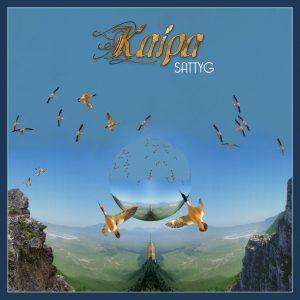 Released on November 10, 2014 via InsideOut Music

Kaipa were formed in 1974 and Sattyg is their 12th studio album. It’s also the fourth since talismanic guitarist Roine Stolt departed to form The Flower Kings. Stolt’s replacement, Per Nilsson, of Scar Symmetry, once again brings his bold and imaginative playing to this record. Kaipa, though, are nowhere near the psychedelic whimsy of The Flower Kings, nor are they a match for the potent death metal of Nilsson’s alternate pursuit. Neither comparison is testament to the peculiar sonic realm created by founding member Hans Lundin and his younger cohorts – Kaipa are progressive rock originals.

A much closer sonic simile would be to Kaipa’s contemporaries Yes. The interplay between Jonas Reingold’s assured bass guitar and the powerful vocal contributions from duo Patrik Lundström and Aleena Gibson is at times reminiscent of the dynamic achieved by Chris Squire and Jon Anderson at their peak. This is a harmonic and melodic tour de force, make no mistake, and one gets the impression the sextet have pushed each other creatively to new heights.

Opener ‘A Map To Your Secret World’ encapsulates everything that’s great about this record: namely compositions that never sacrifice the tune in spite of their complexity; clever keyboard and guitar arrangements; and unmistakable medieval overtones. Clocking in at 15 minutes in length, it’s the longest of the album’s sprawling tracks, crammed full of ideas and hooks and lent a subtle air of mystery by alluring lyrics neither too explicit nor too vague in their meaning.

The medieval influence recurs throughout the album, but is usually incorporated into the songs in a natural, unforced way, sitting comfortably alongside digital keyboards and sharp, piercing guitar tones. This is not a naturalistic record, in spite of the fantastic cover art, nor would you ever describe the sound as folk, in spite of the sway such styles evidently have over the end product. Title track ‘Sattyg’ is the most pastoral piece on offer, and begins with a recorder solo from Ritual’s Fredrik Lindqvist’s in compound time. By the end of this short song we’ve been treated to a blistering duet between Lindqvist and Nilsson, plus delightful fiddle in additive time.

Elin Rubinsztein’s violin makes another guest appearance on ‘A Sky Full Of Painters’, whose opening suggests the band have unearthed a forgotten Baroque chamber work. The title may be a nod towards Kate Bush, and it’s another tune on which Kaipa’s wide-eyed, adventurous approach really works. With daring, colourful juxtapositions, the song is closer to a late Matisse than Manet’s soft focus impressionism. Not every track is as successful – ‘Screwed-Upness’ is as awkward as its title would suggest.

Sattyg is a long record, and by ‘Without Time – Beyond Time’, the formula of tuneful rock music, time changes and high octane guitars, interspersed with traditional Northern European folk interludes is well established. Kaipa are not for everyone, but if the idea of medieval progressive rock appeals, you won’t find a finer or more original take on the sub-genre than that presented here.