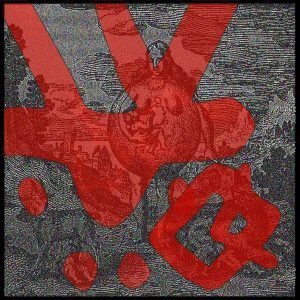 The sound isn’t so far removed from debut bordersbreakdown to indicate a huge departure, but there’s enough on Hindu Milk to reinforce the band’s impressive start to life, which exploded into welcome ears with the Glasgow Jihad EP in 2013.

Opener ‘Edge of the Middle’ kicks off with an ambient backdrop (think early Boards of Canada) into which a melodic synthpop beat emerges followed by a heavyweight melody – that’s the thing with Machines in Heaven, the band never sacrifices melody, which makes their songs more approachable than a lot of electronica. For the most part it’s radio friendly. There’s definitely an air of Hot Chip about them.

‘Hindu Milk’ itself is hugely infectious – the opening immediately euphoric with huge (lots of things are huge with MiH, as if it’s the natural order) synth chords before another catchy melody is revealed around the 1.20 mark. By the time the bass and drums kick in we’re sold. It progresses with 80s-inspired drum fills and just when it may be becoming a little flat a heavily distorted vocal takes it off in a robotic direction tinged with krautrock influences. There are two remixes of the track here – one by Debukus, which is stripped back, relying more on the vocal and less on the synth melody. It’s interesting and moves into a bass-dominant dimension, but it doesn’t touch the original. The Radio Edit is full of life; it feels fuller, tighter, as if every space has been richly filled. If anything – it surpasses the original mix.

‘Voodoo Mechanics’ is weaker, more one-dimensional, but ‘Feel Slow’ stands out, it’s one of those tracks that you could swear you’d heard before (to the point where you tweet the band and their management to ask if they’ve got a commercial deal for it!) – not in a derivative sense, but purely down to the strength of its hook. ‘Holy Particles’ shows a softer side, a dark drone balanced against softly picked strings. It’s a far-eastern inspired soundscape that could have been extended beyond its 5.37 running time. A second movement within the track picks the pace up and becomes almost trance-like in its tone and mood. It’s glorious stuff and a joy to listen to.

With bordersbreakdown Davey Gwynne (production, guitar, synths, vocals), Greg Hurst (production, synths) and Connor Reid (production, guitar synths) showed they were on the cusp of something quite special with this band, and Hindu Milk has only served to remind us just how great they could be.