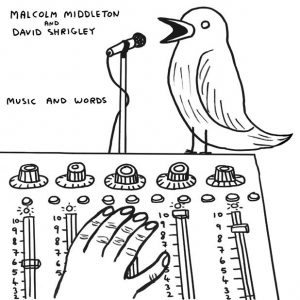 Do you like to be personally insulted when listening to music? If the answer is no, stop reading and fuck off. If you are open to the idea then this collaboration between former Arab Straper Malcolm Middleton and the Turner-nominated visual artist David Shrigley may be worth exploring. It’s not a traditional album in the sense that its songs aren’t really songs at all, but short stories set to music. So it’s entertainment, in a foul-mouthed, abusive, musical narrative sort of way.

To wit, opening track ‘Toast’ raises a glass to “you and your fuckhead arsehole family” before continuing in much the same vein, calling you a wanker, claiming your wife is ugly and that you have “fucking moron children”.

Musically, Middleton’s work sits between Arab Strab and his Human Don’t Be Angry project. The focus is on electronics, drum loops and electric guitars – and when listening to the music itself, it’s faultless and captures the mood of Shrigley’s narrative perfectly. Shrigley meanwhile, extends his iconic cartoons into short stories involving a sword-wielding houseguest, a philosophical child-eating primate and an open letter to a brain – among others.

Like TV comedy sketch shows, some tracks work while other don’t – there are elements where it almost becomes puerile; ‘Caveman’ and ‘Sunday Morning’ are to be listened to once, and skipped thereafter. Alternatively there is some poignancy, ‘Dear Brains’ and ‘A Computer’ providing some thoughtful philosophy, albeit drenched in comedy as black as tar.

Standing head and shoulders above the rest is ‘Story Time’, a delicate children’s tale of wildlife creatures set to an acoustic melody, which descends from frivolity in the woods into murder, fornication and defecation, sometimes all at once. The lyrics are dark, allegorical and importantly, funny, delivered with stone-faced perfection from Bridget McCann.

The album has been in the making since 2007 and came about after Shrigley created artwork for Middleton’s A Brighter Beat solo album. It may be something of a struggle to get through it all in a single sitting, but there are enough individually strong tracks to make it worth a listen – it’s unlike anything you’ve ever heard before.