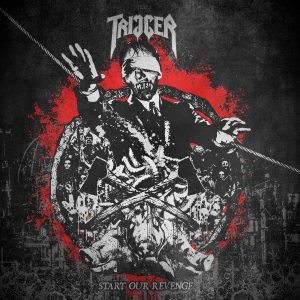 This isn’t one of those albums that you have to screw around debating whether you’re going to like it or not. Unless you’re a grindcore genre newbie and aren’t versed in the different approaches, the debut album by Glauchau, Germany’s Trigger entitled Start Our Revenge.

Known more for their splits rather than their full lengths, Trigger began their trek in 2006. Since then they’ve gone on to splits here and there throughout the years and a demo (2007). 2009 saw a split with Bizarre X and Run Time Error. The band picked up their game again for a split in 2013 with Attack of the Mad Axemen and this year (2014) with Abjured. And after eight years, they’re finally ready to throw their mightiest at us.

The name Start Our Revenge may evoke the remembrance of With Honor’s (worst release by eons) This is Our Revenge or, by title, sound very hardcore/punk, but Trigger don’t find themselves falling in with hardcore/punk influences so much as they do with powerviolence and grindcore influences. To some that may be apples to oranges, but to others it’s the difference between Magrudergrind and Phobia.

When putting this on and spinning it, the word “harsh” immediately pops into my mind. Trigger have an affinity for crafting some ruthless tracks but there’s an oddity to their quality. They are (rightfully) self-proclaimed “drums n bass grind violence” because they lack a guitar. When one first listens to Trigger, they might wonder why the band is lacking on that trait, figuring maybe it was mixed out or simply recorded too low. No. Trigger have throw together a band fully lacking this common quality within its genre specifics and pull it off with glorious ease. And it’s odd too because the bass is booming, as are the double bass drums, but the mids and highs still sound cranked up in the traditional grindcore style.

Tigger manage to bring to mind the older recordings of Magrudergrind mingled with Insect Warfare. Start Our Revenge is an album that is massively distorted. The vocals are something you might find on Japanese claustrophobic metal unit Endon or the higher pitched sections of ACxDC. Mix that with the occasional deeper Dan Boleri (Spazz) vocal shot and you’ve got a picture of Trigger. Pieces like ‘Drunken Unsupport’ push the full potential of the band as they cite their influences with tenacious veracity.

The band often trudges forth with a full blast in hand, igniting the playing field like it’s drenched in petrol. However, tracks like ‘Creating the Madness’ or ‘The Hopeful Hands Are Sleeping’ hold things back. A sludgier, slower attack that serves to break up the album only a little. It hardly tames the assault that Trigger are already bringing in spades though.

What’s odd about Trigger is that their execution isn’t anything you haven’t heard before but it’s oddly infections. The album gets better and better the more it’s spun. It’s also easy to forget this is a three piece with just vocals, bass and drums. It’s mixed like a grindcore album. And while Trigger cite influences in 80s hardcore/punk, they are ultimately more fixated on 80s/90s powerviolence and grindcore with slashes of sludge sections here and there. It’s a lightening-fast, raw twenty-three minutes that is well crafted. Start Our Revenge is absolutely worth checking out if you’re a grind or powerviolence fan.