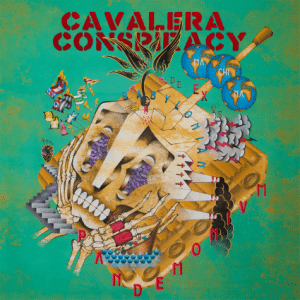 Released on October 31, 2014 via Napalm Records

Few names stir up as much trepidation and excitement in the metal world as does the name, Cavalera. Synonymous with sonic tribal ventures and anthemic, groove metal the brothers Max and Igor Cavalera have etched their name into the metal history books. And whereas their newest incarnation, the Cavalera Conspiracy, nailed and improved upon that trademark sound with their debut release, Inflikted, their third studio release Pandemonium almost disregards that sound entirely. You can almost hear Max himself screaming at Igor to “Fuck the groove!”, a war cry that the singer/guitarist apparently spewed upon his brother and drummer Igor every time he fell back into their trademark metal grooves on the kit.

For if Cavalera Conspriracy?s previous albums were supposedly the Sepultura albums the fans had been waiting for, Pandemonium goes above and beyond that to fully establish themselves as a unique and dynamic band in their own right. And serves as a violently awesome reminder that Max and Igor together, once were the South American kings of thrash metal. With a few nods to the seminal thrash/death metal releases Morbid Visions and Beneath the Remains, Pandemonium is relentless throughout it?s entirety. Relentless and raw.

There?s an obvious departure from the highly polished productions that Max has with Soulfly and is more reminisce of the harshness that was Nailbomb?s Point Blank. The twelve tracks are a solid smack in the face that?s worth all the pain. It?s a modern display of thrash far superior to any of Sepultura?s current releases and if they keep releasing albums like this the thrash world is in for a treat that only the Cavalera?s can dish up.