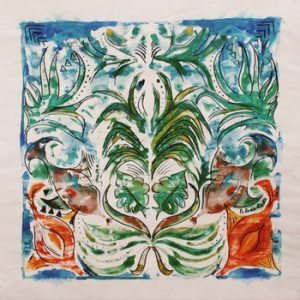 ‘Del Sur’ is four-piece band coming with the sunny spirit of Philadelphia with all the sense and maybe clichés you could imagine. Originally the home-based musical experiment of Michael Collier a couple of years ago the band is currently working on the first EP ‘H.A.G.S.’, due in late January. Just in time to stop missing Xmas holidays and enjoy the vibes of summer freaky vacation that each of us had once.

From the 1st track ‘In my Room’ you are put in some peculiar chilled out atmosphere with classic guitars, gentle bass and amazing percussion. The band manages to combine surf-rock sound with tropical spirit reminding me of the Beach Boys’ ‘Kokomo’. Vocals are more meditating than singing in its normal sense, with a bit of an echo of Neutral Milk Hotel. It often feels hard to catch the lyrics as the meditating voice is weaved into the music canvas as an ordinary instrument.

As meditation moves you away from time and space, the sound of Del Sur comes more surrealistic in ‘Lifeguards’ with some Hawaiian guitars. But that trip doesn’t take but 3.5 mins and settles you down on Earth.  Full of reminiscence and somehow reflection ‘How High We Were’ and ‘Melted Down’ make you sing out with Michael ‘how I just wasted my time…’.

A piece of light sorrow in that album is ‘The Tide is Coming In’, a simple guitar-based instrumental theme, telling that all’s coming up to the end. The final track of H.A.G.S. is full of pathetic and ‘summer’s gone’ mood’ – ‘We’re Not Young’ sounds like a male version of good old Dolores O’Riordan’s ‘Ode to My Family’.

This release is full of force, like every first-something (debut album, first demo etc.) a young band makes in its career. It’s good to listen to when you feel fed up with the psychedelic tone of Tame Impala or MGMT, not yet ready for the more urban mood of The Drums, but strongly need some sun around you.