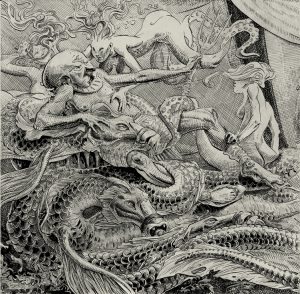 Released on November 25, 2014 via Elemental Nightmares

Elemental Nightmares was a project where you signed up and paid to get essentially a compilation album split up into different parts. Seven splits have been issued and this review is for number five which features Will of the Ancients (Canada), Stortregn (Switzerland), Eternal Storm (Spain)  and Kaos Vortex (Germany). Each band has one song on the EP, with the first song being Kaos Vortex with ‘Chronostasis’.

Kaos Vortex are a death metal band that have released their own EP called Dehumanized. ‘Chronostasis’ begins with a nice melody before the guitars and drums kick in and build to a grinding heavy sound that never really goes anywhere till the climax of the song where a solo kicks in. This song in my opinion was the weakest of the 4 as it got very repetitive and overstays its welcome at almost six minutes long.

The second song on the EP is by Eternal Storm from Spain who formed in 2007 and have also released one EP called From The Ashes. ‘The Great Wings of Ashes’ in contrast to the previous track is the strongest track on the album. The song starts with a nice melodic opening before it loses much of the melody with heavier riffs and growling vocals on the verses before the melody kicks in again for the chorus. The song breaks down about half way through before it builds to its frantic conclusion.

Will of the Ancients provide the third song with ‘The Apex’. The band have released an EP and a fully released album, but in that time have underwent several band changes that have halted any momentum from the band. ‘The Apex’ begins frantically with fast riffs and drum rolls, before the vocal comes in followed by the melody. The song carries on like this with various phases of the melody being dropped and brought back in as the song works its way to a finish.

Stortregn finish the album with the ‘Neverending Singularity’. The track opens with the wind blowing before we get some clean electric guitar that fits in with opening lyrics that talk about the wind caressing the trees. The heavy guitar riffs then kick in as the song builds itself up to an excellent solo three minutes in as it propels the song down the closing stretch which finishes the EP of nicely.

The idea of Elemental Nightmares is a good one in that it gives the listener a brief introduction to many bands that they may not have heard of. Number five is a good EP which has a slow start, but finishes well with 3 very good bands that show great potential.